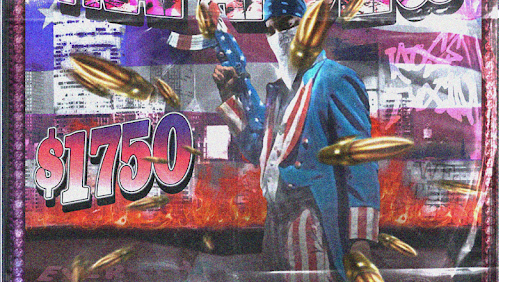 Ross Taxin and Trap-A-Holics team up for their collaboration catchy hit, “$1,750”. Thanks to the new trendy track — these two are set to be banking every time! Following an 18-month bid at Fayette County Detention Center, Ross returns with a fresh release! After his release from Jackson State Penitentiary, Taxin feels as if it led to a name change and a new sound. More so after not releasing a project or single since 2018.

“I can’t keep rapping about the same shit. I had to grow up”.

Although he went on a short hiatus, Ross remained consistent and took the down time to dive deeper into his music. First, Ross Taxin burst back onto the scene with his anticipated new released single “$1,750” in collaboration with popular Las-Vegas Dj Trap-A-Holics. Within a short few days of its drop off, the trendy track has already garnered support from notable platforms such as Worldstar, The Progress Report, Dirty Glove Bastard, PreciseEarz, and RapTV.

In fact, accompanying the audio is a vibrant visual where fans see more of a playful side of the artists. Living life to the fullest, the video kicks off with Ross pulling up to his Parole Officer blowing smoke as if his risky matters won’t have consequences. Especially following the Clayton County rhymer’s recent 18-month bid he served. Living life like his lyricism, Ross admits to punching in for the entire “$1,750” record and creating a vibe for ZaZa.

THE RISE OF ROSS TAXIN

Ross Taxin’s delivery is unconventional, yet unique. He stretches out his words and uses his voice as an instrument. In doing so, Ross is on the rise to becoming a household name. As a result, he’s utilizing 2022 to record and release over 20 songs and videos. As well as attracting the attention of major record labels thanks to the support of major industry players such as DJ Drama and DJ Holiday. Since the eighth grade, Ross Taxin has been fueling his passion for music. Continuously perfecting his craft, now at the age of 23, he has attracted the attention of local Atlanta stars Jose Guapo and Nefew. Additionally, he has been co-signed by popular Atlanta icon Curtis Snow from the Bluff — which was major!

Keeping up the momentum, Ross has already recorded 6 projects since returning home. Next, he’s creating a collaborative project with one of his favorite DJs to keep fans going UP all 2022! Ready to take the music world by storm, Ross Taxin keeps cooking up heat in the kitchen! Get familiar with this trendy talent as this is just the beginning. Lastly, stay tuned here for all things Ross Taxin! Press play on “$1,750” and let us know what you think!