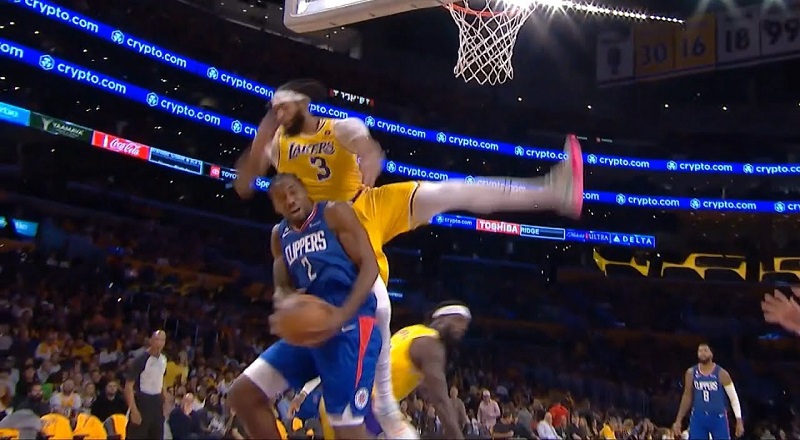 Anthony Davis has scary fall on his shoulder over Kawhi Leonard

Anthony Davis has earned a reputation for being injury prone. Few players have experienced the kinds of freak accidents that AD has. Dating back to his time with the New Orleans Pelicans, Anthony Davis has had odd injuries. The one season where AD was healthy, he helped lead the Los Angeles Lakers to the championship.

Anthony Davis is one of the NBA’s best players, when he is healthy. For the Los Angeles Lakers to win games, many analysts have said AD will have to overtake LeBron James as the Lakers’ best player. Last season, both LeBron and AD experienced injuries, which kept them off the court. As a result, the Lakers missed the playoffs. The Lakers have only made the playoffs twice in the past nine years.

Anthony Davis and the Los Angeles Lakers faced off against Kawhi Leonard, Paul George, and the Los Angeles Clippers, tonight. Midway through what was a close game, Anthony Davis was trying to close out Kawhi Leonard. When he landed from a jump, Anthony Davis took a weird fall. As he went down, Davis landed funnily on his side, which looked like a shoulder injury. The crowd was worried, but AD was fine. Unfortunately, the Clippers’ late game execution cost the Lakers the win, in their home opener.

Anthony Davis has scary fall on his shoulder over Kawhi Leonard