Home » Video » Damian Lillard pretends to be talking on his phone, while at Summer League game, but his text messages were actually showing [VIDEO] 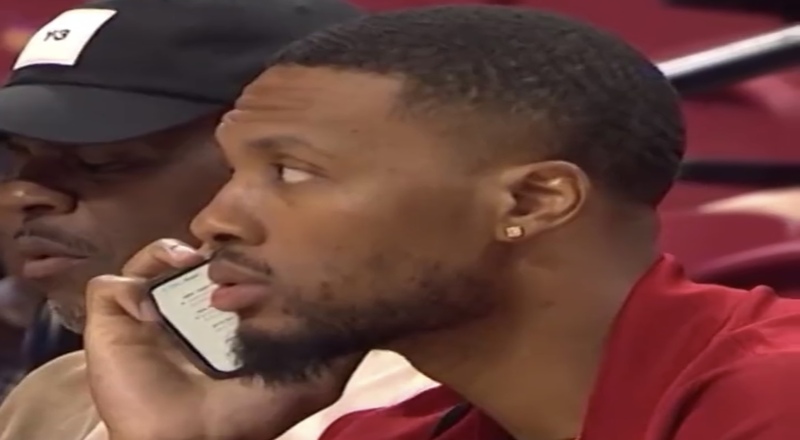 Damian Lillard pretends to be talking on phone at Summer League

Last week, Damian Lillard had the NBA world on fire, after signing a two-year extension with the Portland Blazers. This added two years to his contract, as this was a 2-year, $161 million extension. This almost guarantees that Lillard will finish his career with Portland. He’s been with them, ever since getting drafted by them, back in 2012.

Like many other NBA stars, Lillard is in Las Vegas, to check out the Summer League games. Lillard is now going viral, after being seen court side, and trying to hint that he was talking on the phone.

Fans quickly noticed that Lillard wasn’t actually talking on his phone. Instead, his text messages were actually on display, and with no phone call in sight. It’s odd that Dame was doing this, but he may have wanted to not be bothered.

The Blazers made some moves this offseason, which included trading for Jerami Grant, from the Pistons. Portland finished 27-55 and 13th in the Western Conference last season, largely due to injuries to Lillard, and trading away CJ McCollum.

Check out Damian Lillard pretending to be talking on his phone while at Summer League, below.

Damian Lillard pretends to be talking on phone at Summer League

More in Hip Hop News
Joycelyn Savage, one of R. Kelly’s alleged victims, claims that she’s engaged to him
Rubi Rose calls Lil Tjay the GOAT, after getting shot seven times, and surviving