Home » Video » #FreeMrRiley: Music Teacher Arrested After Beating A Student’s Ass For Repeatedly Calling Him the N-Word and Throwing A Basketball At Him [VIDEO] 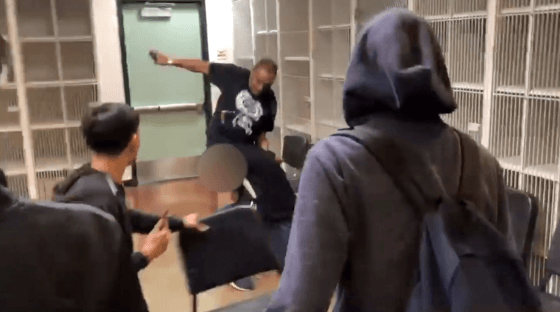 I’m not one to condone violence, but this kid had it coming.

Marston Riley, 64, was taken into custody on suspicion of child abuse and causing great bodily injury on a child after the brawl at Maywood Academy High School on Pine Avenue was reported to authorities around 1:30 p.m., said Los Angeles County Sheriff’s Deputy Joana Warren, a public information officer with the department.

Students who spoke with KTLA Friday night were all sympathetic to Riley, saying the classmate involved had pushed him to the brink.

The students said the confrontation began after Riley asked the young man to leave the classroom because he wasn’t wearing a proper uniform.

The student allegedly refused, and cellphone video captured by another student shows him challenging the instructor, using profanity and repeatedly hurling a racial slur at Riley, who is black.

The situation escalates further after the student throws a basketball at Riley, who is then seen pulling out his cellphone to call for backup.

The student continues to insult and provoke Riley. The teacher holds his composure for a time but then punches the boy in the face, swiftly and without warning.

The ensuing brawl lasts about 30 seconds, with the pair clambering across the room as Riley repeatedly delivers blows and others in the classroom shriek. The boy is only able to deliver about one punch.

The video shows Riley continued to aggressively pursue the student even after other school officials responded to break up the fight.

The footage ends as the student is being pulled from the room by campus staff.

Several students have come forward in Mr. Riley’s defense saying that he is a great teacher and that the student pushed him to his breaking point. Not only do teachers have to deal with these disrespectful kids everyday, they barely get paid anything. The student should be expelled from school.

More in Hip Hop News
Two Sides to Every Story! Chris Sails Details What Happened During the Fight Between Him and Parker McKenna: I told her I didn’t want to be with her anymore, she hit me and threw a Hennessy bottle at me while my son was right there [VIDEO]
Rich The Kid ft. YG – “Mo Paper” [VIDEO]