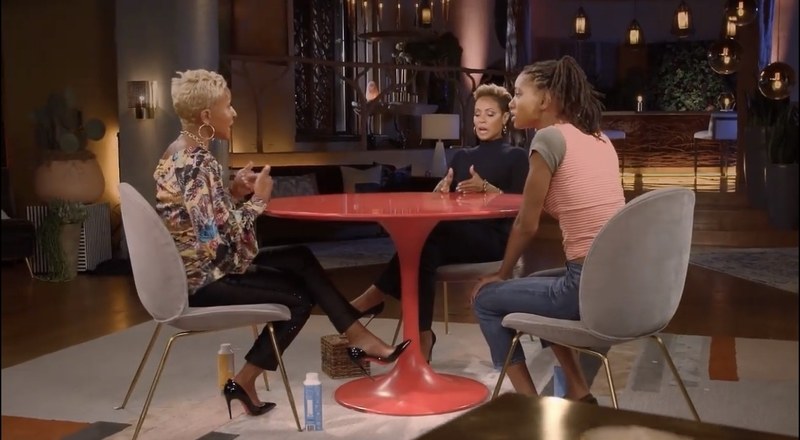 This episode of The Red Table Talk is a must see!

“I knew that my mother and my father had a very violent relationship early on,” Jada says at the beginning of the episode. “She has a couple scars on her body that, as a child I was just curious, I was like, ‘Oh mommy, what’s that? What’s that?'”

Jada talks to her mother, Adrienne Banfield-Norris, about her relationship with her father, the late Robsol Pinkett, Jr., who died in 2010. Adrienne says Jada’s father physically abused her and was typically drunk during the incidents, including one time when she says he threw her over a banister and left a scar on her back.

Adrienne shares that the breaking point came when he arrived at her parents’ house where she and Jada were staying and was angry, and started hitting her while “in a rage.” Adrienne gets emotional when recalling how she ran to a neighbor’s house across the street and yelled for them to get her help. Adrienne left Jada at the house while she stayed with the neighbor, noting that Robsol would never hurt Jada. When the police arrived, Adrienne says she knew the incident was the last straw.

“His addiction — he just wasn’t rational,” Adrienne says. “I feel like once again I’m trying to make excuses for him. And I think that’s what women do. But whatever the reasons were, you have to — at the end of the day  — you have to protect yourself.”

Jada breaks down talking about her late father, sharing that he was a “gentle soul” once he got sober and noting that he didn’t have the best upbringing.

“It’s not easy to hear that your parents experienced that together,” the 47-year-old actress says, Now that I’m older, I have so much more compassion in knowing what he had gone through. You know, ’cause I was pretty harsh on him.”

Watch The New Episode of Red Table Talk Below: