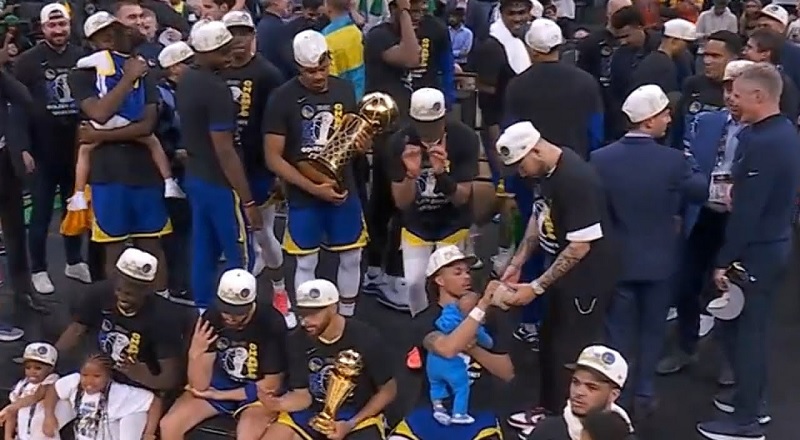 Jordan Poole does the Grizzlies Griddy Dance after winning title

Jordan Poole was drafted by the Golden State Warriors in 2019. As a result, Jordan Poole missed out on all of the NBA Finals runs. Despite joining the defending Western Conference champions, Jordan Poole played for the worst team in the NBA. Long before the 2020 NBA season was suspended, the Warriors were finished. In 2020, the Warriors finished with a 15-50 record, which Draymond Green so often speaks of.

Jordan Poole cracked the Warriors’ rotation during the 2021 season. Last year, the Golden State Warriors got back on track. Stephen Curry returned to the lineup and the Warriors managed to get back into the playoff race. However, the Warriors finished outside of the top six in the West. As a result, the Warriors had to go into the play-in tournament. While Jordan Poole and Steph Curry formed a solid duo, they were not enough to beat the Lakers or Grizzlies.

Jordan Poole and Steph Curry found their groove, in 2021-22. The Warriors formed a new core with Curry, Poole, Andrew Wiggins, and Draymond Green. As a result, Golden State was tied with the Phoenix Suns for the NBA’s best record for the first part of the season. Unfortunately, the Warriors fell apart when Klay Thompson returned. However, this is where Jordan Poole proved his worth, helping the Warriors hold onto the third seed. In the playoffs, the Warriors and Grizzlies formed a rivalry.

Jordan Poole won his first NBA championship over the Boston Celtics. While accepting the trophy, Poole could be seen doing the Memphis Grizzlies’ infamous “Griddy Dance.”

Jordan Poole does the Grizzlies Griddy Dance after winning title