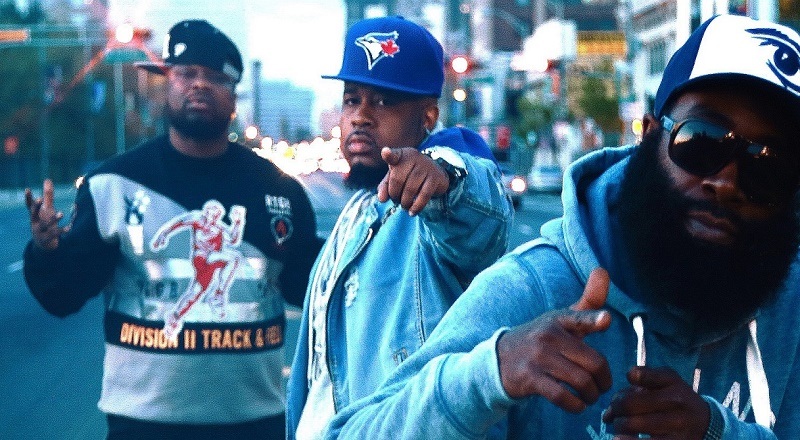 Currently, the spotlight is being centered back on New Jersey. A lot of new blood is coming from there, mainly Fetty Wap, who has owned the game this calendar year. While Fetty Wap is definitely making an impact on the game, he is not the only artist in NJ doing his thing.

The 050 Boyz are a three man effort with ties to many veterans in the game. There are a lot of people who are supporting the 050 Boyz and their videos are big successes on YouTube. It makes it seem as if it is the right time for them to drop their debut album.

Hip Hop Vibe was fortunate enough to have the 050 Boyz for the latest edition of the On The Rise series. In their interview, the o50 Boyz gave their opinion on the state of New Jersey hip hop. They would also go onto discuss their upcoming album, Everything 050.

Can you guys explain to the people the history of New Jersey hip hop?

Riq Da Kid – Starting with the Sugar Hill Gang being from Englewood NJ and having the first hit rap song “Rappers Delight,” you then got Naughty by Nature being the first rap group to win a Grammy. So many others like Queen Latifah, Redman, Lauryn Hill, Lords of the Underground, Poor Righteous Teachers, Rotten Raskals, Artifacts, Rest in Peace Apache, OCM, Milk Bone and Rest in Peace Fatal have paved the way or made a mark in hip hop, but a lot of times it’s forgotten! At one point in time Treach was Jay-Z so to speak. His style of rap and how he even dressed was copied and he wrote for everyone. Both Treach and Redman were in a lot of people’s top five rap artist lists and with Queen Latifah being one of the top female artists of all time, we have big shoes to fill!

Prince AK – Well the first hip hop record to get air play were from Jersey if I’m not mistaken, Sugar Hill Gang and so on. Then you got Poor Righteous Teacher, Twin Hype, Flavor Unit, Redman, Lords of the Underground, all these guys played a big part in hip hop generally, not just in Jersey.

Tru Trilla – Well if you love the 90’s, you love Jersey hip hop. We had some of the main contributors seen and unseen, straight up!

How did you guys form the group 050 Boyz and what is the connection to Flavor Unit?

Riq da Kid – Well the 050 Boyz came from everyone working alongside Prince AK initially when he returned from an acting career and started to push forward with music again. AK had been a hype man for Flavor Unit’s Supreme C back in the 90’s.

Prince AK – When I was getting it together again, I had an artist called B Wells who Funkmaster Flex was liking a lot. He even played his record daily but unfortunately he ended up incarcerated, so I called Tru & Middy, two brothers from my hood who’ve been rapping for a long time. Me and Riq da Kid had talked about how I was going to pull him in on the movement and the rest is history. We started out as five, but now we’re three. Flavor Unit is family, my ol’ partner Supreme C had a deal with Flavor in 95, and I’d be performing as hype man and the album’s producer Clinton Place was the tour DJ at the time. Clinton used to be known as DJ Jamal #9.

Tru Trilla – We formed the group through Prince AK, and my bro Fee came with the name “050 Boyz” being that is our numerical code for Jersey. So we stamp it and brand it. The connection’s always been there since the early 90s through Supreme C, Trigger Treach, KG and Vinny, Pookie, Fam Famiil and Fince.

Describe the sound of the 050 Boyz and name a few of the influences that inspired the crew early on?

Riq da Kid – It’s Hip Hop, Boom Bap with a feel of the Golden Era but with a contemporary sound. Working with DoitAll from Lords of Underground and Treach from Naughty by Nature has certainly helped us learn and progress, but a shared inspiration is to be musically successful. Also artists like Run-DMC, Rakim, Kool G Rap, and L.L. Cool J were inspirational to me in the earlier years.

Prince AK – Original Boom Bap, and for me, guys like Biz Markie, Juice Crew, KRS-One and Slick Rick were an inspiration.

Tru Trilla – The 050 sound is the pure cure for the illness of wackness, straight up! Listen to it twice a day, help keep the corny away!

Do you feel that the Underground has always embraced NY artists over those of NJ?

Riq da Kid – Up to a point, yes. I think the biggest problem is that Jersey never had its on radio station where everything was always done in NY. So we never were able to separate ourselves because we still needed NY’s resources.

Tru Trilla – I can’t really say that because in the late 90’s and early 2000’s our group It’s Only Family used to tear the underground scene up and they showed nothing but love.

Who makes the cut as the starting five of NJ hip hop?

Riq da Kid – I’d base it on who made biggest impact. Naughty by Nature, Queen Latifah, Redman, Lauryn Hill and Lords of the Underground…..with Joe Budden of the bench. Gotta give him his props, he’s a dope artist and lyricist.

What are your thoughts on the recent racial issues in the country including the confederate flag, black churches and police brutality?

Riq da Kid – Realistically its always been here. It’s just being seen a lot more because of technology, 24 hour news stations and especially social media. But the killing in general needs to stop!

Prince AK – It’s all a set up, staged shootings by folks who work for the government and it’s a bigger issue than that. It’s about incentives to push the black folks to act like wild savages so they can bring in Marshall Law & throw people in FEMA camps.

Tru Trilla – We been, and will be, stuck at the door of change and progress if we don’t address not just the symbol of hate but the sponsors of it. Those who gain value from it, those who support it and exploit the liberty of others with no regard for life.

What’s new with the 050 Boyz and what are your plans for the near future?

Riq da Kid – Everything 050 is our debut official album as a group coming August 4th and we all have solo projects coming as well.

Prince AK – The first thing is our debut album Everything 050 dropping August 4th and then there’s new merchandise coming in the future. Y’all will see solo projects by all of us also.

Tru Trilla – Yeah, just like they say, Everything 050 drops on August 4th. Do yourself some justice and grab that. Also we have more projects that’s done already and up and coming shows in the mix. We working, 050dat!

Prince AK – Y’all can find me on twitter under @PrinceAk_050.

Dope Hip Hop, Sexy women, and Sports. An entertainer specializing in Hip Hop and everything media related which includes production, multimedia, radio promotions, model and artist interviews, online promotions and marketing. Kareem Stevens better known as Stranga the Great is an independent underground Hip Hop artist, producer and media specialist. He has worked with and been on projects with artists and producers from over 5 countries including Craig G from the Juice Crew, Fredro Starr of Onyx, The Wisemen, Pop The Brown Hornet, Chi King, Holocaust, Guerilla Alliance, Rkitech, Buckshot, Ali Vegas, Keith Murray, Lord Tariq, Bronze Nazareth, Canibus, Killah Priest, Chief Kamachi, and Triple Seis. Stranga the Great has been featured in publications and websites such as the Source Independent, HipHopWeekly,Thisis50, Coast2Coast, VladTV, Datpiff, ThatCrack, eastcoastdigitalradio, therealtechn9ne, coredjradio, MTV.Com, and VEVO plus countless more and has had production placements on MTV's Pimp My Ride. Not only a rapper and producer Stranga the Great is also a brand associate and staff writer for Hip-HopVibe, Promo Palace LLC, IndieCastle.Net and Promo Palace Blog which details every facet of promotions and the Hip Hop and Urban world. Stranga the Great is also beginning to work closely with Urban Models and Video Vixens with his brand Team Greatness Productions which promotes Urban Models online, and schedules and assists with interviews, publicity and booking.