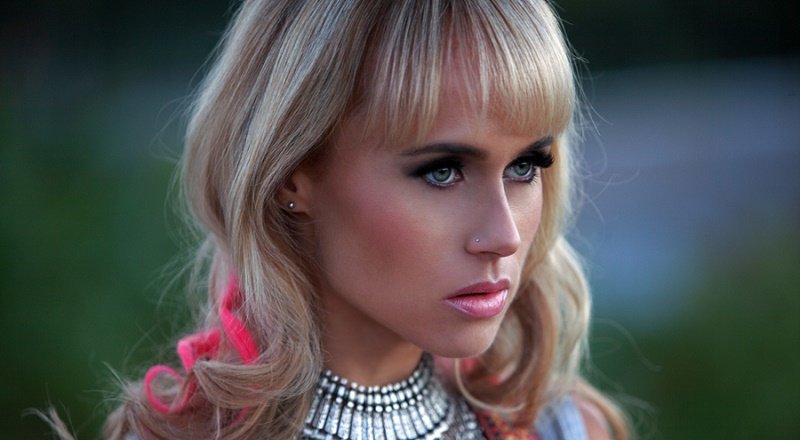 Just a couple of years ago, Toronto was hyped as a music city to look out for. Now, it’s a breeding ground just as hot as Atlanta and Chicago. They have a good thing going, up there, that cannot be ignored, anymore, and their talent is taking over.

Jennie Laws is hoping the people have room for her on their list of breakthrough artists. If they give her music a chance, they definitely will want to hear more from her. Despite her stature, she is actually one of the more soulful artists in the game.

Recently, Jennie Laws spoke to Hip-HopVibe.com’s On The Rise segment. Here, she let the world know what her plans for the game are. She wants to share with the world her music and tell her story, which she shared in such a polite manner, here.

Why do you think the artists from Toronto are having so much breakout success, as of late? Well, Toronto is such a diverse city with a ton of culture, inspiration, and creativity to draw from. For example, one of the main producers I work with here has roots in Sudan, so I love how you can always hear a tinge of those melodies and rhythms in his work. People like The Weeknd, Belly, Alessia Cara, and Drake have such diverse backgrounds and influences, but aren’t afraid to be catchy and poppy at the same time, so they’re winning. PARTYNEXTDOOR, Jessie Reyez, and Majid Jordan, for example, are following in their footsteps.

Where do you fit in the mix of the talent coming from Toronto? The culture and inspiration in Toronto is infectious, so even people you don’t expect to be soulful like Justin Bieber, the whole Magic! band and myself have naturally soaked up the swag and good taste that the city embodies. As well as my many years in the States, singing in a lot of urban scenarios, including an elite Gospel group, my appearance and stature (I’m super tiny) often keeps people guessing and underestimating me.

I’m not gonna lie that it makes me smile inwardly to see the shock on most people’s faces when they hear me sing! But, to answer your question, I’m definitely urban because of my strong hip hop, R&B, and jazz influences, but I’m on the edges of the genre because of my roots playing guitar around the campfire, serenading my friends growing up. People in the business often tell me that I’m in my own lane, and that it’s a good thing, in the long run, to be unique and slightly left of center. Since I play instruments, dance, compose, and produce, that puts me more in an Anderson .Paak or Alicia Keys kind of lane, as crazy as that sounds.

What is the inspiration behind your single, “Sabotage?” Hm, well, I was in a relationship with someone who told me they wanted that with me, then proceeded to do everything to push me away and let me down. In essence, ruining what they could have had. It was like they were shooting themselves in the foot, because I know to this day that that’s not what they wanted. But it was too little too late so I wrote this song about it in the heat of the moment. (Which is how I usually write songs, about what I’m going through at the time.)

Do you believe this record will become a summer anthem? I plan to put out a lot more songs before the summer, so I have no idea what track will catch on with listeners the most. All I can do is focus, first of all, on making my music as dope as I possibly can in that moment, and then do my best to promote it within my means to keep going from there. I keep growing every month as a vocalist, musician, writer, and overall artist. I have this really good feeling about things. Thank you for supporting my music while it’s still simmering, by the way! But, when I think about it, since “Sabotage” is a ballad, it would probably one of the next few releases of mine, “All About You,” “Forbidden Fruit” or “More Than I Can Stand” which are up tempo tracks and would be more likely to catch fire in the summer.

Can you tell us more about your new album? The new album is starting to finally take shape, with more production from S.L.M.N., as well as Kickraux, THX, Ron Feemster, and JL Brown, and collaborations with Dwele, J Doe, and my late mentor/friend Leon Ware, who just passed away yesterday actually. (May his playful, genuine, musical, sensual spirit rest in peace & his music live forever…).

The new album is mostly about relationships – good, bad, and confusing ones. It’s got a decent amount of real instruments on there, and even some orchestral stuff – real strings, horns, drums, guitars, etc. But, the vibes are always distinctly soulful with lyrics & melodies from the heart. My aim is to take you on a journey of sound and take your mind off your worries for a while with something different and exciting yet somehow already familiar.

As an independent artist, do you draw from the things often said by Master P? Absolutely. I don’t think there’s one independent artist out there, at least in the urban scene, who hasn’t been inspired by Master P’s legacy, vision, hard work, and motivational message. His emphasis on hard work being your number one strategy has been reaffirming for me, and how your attitude is inevitably up to you and determines your success. Not to mention his advice about embracing both the dark and light side of life. It’s all relative because I could never know the darkness he’s seen, but I do believe in letting yourself go to the shadow side in my music for comfort ironically, as a kind of therapy.

With the year of 2017 still being rather young, what comes next for you? Finishing my next single “All About You” featuring J Doe as we speak, with S.L.M.N. and Ron Feemster on the production and Bob Horn mixing it live on a mixing show where audiophiles can watch and learn from his techniques. (Stay tuned to my social media pages for more info on that.) Then, working hard to wrap up the album by the summer while scheming about and releasing a few new visuals and singles, in the meantime. Also, doing some songwriting, guitar, and vocal recording, as well as string arranging in my spare time for some other super dope artists and producers on the rise, primarily from North America. I’ll announce everything when the time is ripe.

Watch “Sabotage” by Jennie Laws below: