Home » Articles » Save Those Tears! The BeyHive Forces Funky Dineva Into Apologizing After He Calls Blue Ivy “Ugly” [VIDEO] 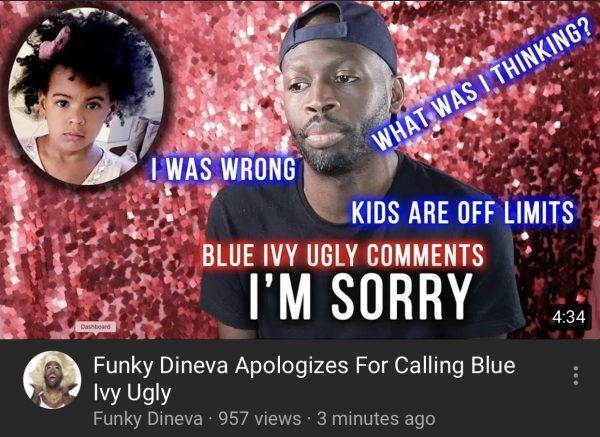 After receiving a tremendous amount of backlash, Funky Dineva has issued an apology for calling Blue Ivy “ugly.”  Everyone should know that the BeyHive is nothing to play with. They quickly took over his social media with bee emojis and reminded him that he had been evicted multiple times and shouldn’t be worried about a child.

I, for one, don’t believe he’s really apologetic. I just think he wants some YouTube views.

Do you accept his apology?

More in Articles
Trey Songz went IN on Charlamagne Tha God on #TheBreakfastClub, calling him a “d*ck,” and going at DJ Envy and Angela Yee for “feeding off negativity,” Twitter dismissed him as looking for attention
Shady! Nicki Minaj Cast Cardi B’s Strip Club Enemies In #GoodFormVideo [PHOTOS]