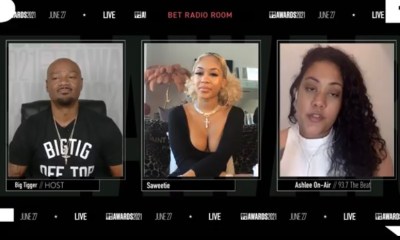 Last weekend, it was rumored that Saweetie would finally release her debut studio album, “Pretty B*tch Music,” this week. This was revealed during her performance on “Jimmy Kimmel Live.” Her team reportedly went on to say that this would not be the plan.

Saweetie is now clearing the air, regarding the status of PBM. She spoke with Big Tigger and Ashlee On-Air in an interview, and revealed that the album was originally planned for a release this month, and expressed being grateful for her BET Awards nomination for Best Female Hip-Hop Artist. She added how regarding the album, she is making sure that people for sure “feel something” with every record on it.

“Yes, PBM was supposed to come out this month, but I was really living with it. And one of my goals is for people to really feel something with every song, so I had to go back and reconstruct some songs. Just know that I’m a perfectionist and it’s on the way.”

Saweetie treated fans to a collab EP back in April, with “Pretty Summer Playlist: Season 1.” Now, fans get her first studio album, which could very well be a top five project. Hopefully, the finalized release date is revealed soon.

Check out Saweetie’s latest interview below.