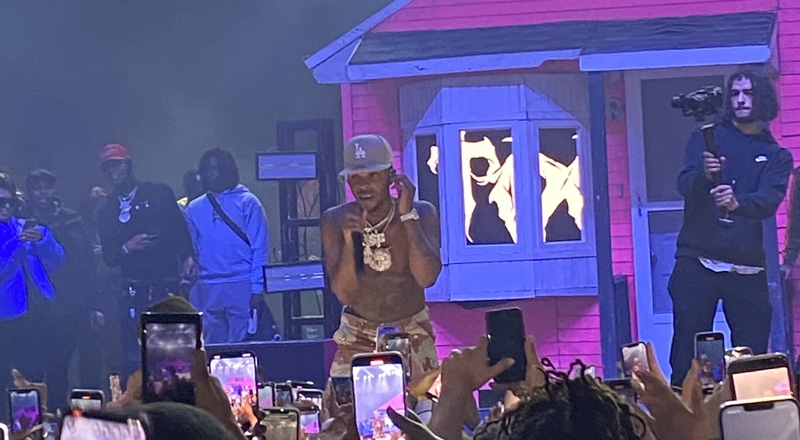 On Monday night, Toosii continuing his “Thank You For Believing Tour,” as he brought the show to Atlanta. This was held at The Tabernacle, the downtown area. Prior to Toosii’s performance, Lakeyah opened up the show, as she’s been one of the hottest rising rappers out, as she recently signed to Quality Control Music.

As soon as Toosii took the stage, the energy was electric from his fans, in the ATL. His female fan base appeared to be the most energetic, as they love his R&B-like records the most, such as “Love Cycle,” featuring Summer Walker. Toosii went on to perform that record, near the end of the show.

Toosii also performed other notable tracks from his latest “Thank You For Believing” album, such as “5’5,” featuring Latto, and “Head Over Hills.” In addition to these popular records, Toosii went on to give fans surprises as well, such as performing an unreleased song, as well as bringing out Young Thug, to perform the smash hit single, “Ski.”

Toosii also looked out for the fans, in a solid manner. The rapper stopped several times, briefly, during his performance, after finding out that a few fans had been passing out. He soon offered these individuals some water, in order to stay hydrated. From that point on, he continued to rock The Tabernacle.

Toosii’s “Thank You For Believing” album received plenty of support, as it went on to peak at number 25, on the Billboard 200 chart, in early May. Additional appearances included DaBaby and Key Glock. The deluxe edition for this project, “Thank You For Believing: The Manifestation,” went on to be released in July, and contained collaborations with other stars, such as Fivio Foreign.

Toosii is also almost complete, with his entire Thank You For Believing Tour. The remaining dates are November 23, 24, and 27, in Myrtle Beach, Charlotte, and, Raleigh.

Check out a closer look at Toosii’s “Thank You For Believing Tour” concert, in Atlanta, below.

Continue Reading
You may also like...
Related Topics:atlanta, featured, Thank You For Believing Tour, toosii