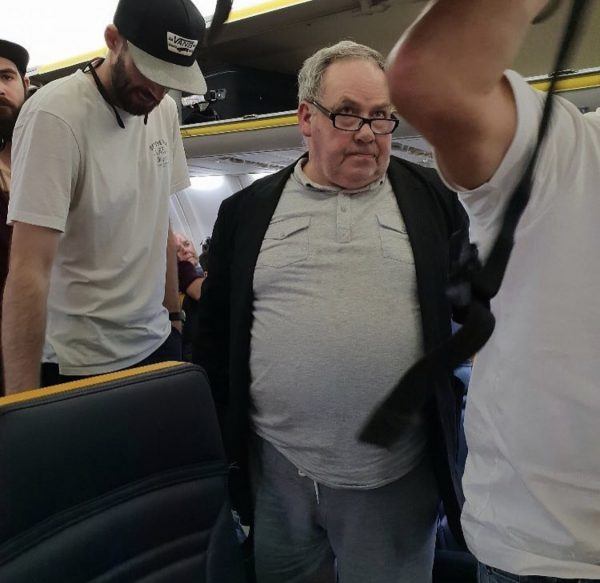 Customers are now planning to boycott Ryanair Airlines as a white male passenger was caught on video hurling racist insults at a black woman who was seated next to him. Instead of removing the unruly white man from the flight, the black woman was asked to move her seat. Yes, you read that right.

In the footage, a man in a window seat was heard saying he refused to sit next to an elderly woman seated in an aisle seat. The man hurled insults at the woman and called her an “ugly black bastard” before the flight took off, according to a cell phone video recorded by London-based musician David Lawrence.

Lawrence, 56, told CNN in a phone interview Sunday: “When you watch the footage, you’ll see it starts to unfold where this man starts a torrent of abuse, absolutely disgusting, despicable words thrown at this elderly black woman”

“If that was another situation where that was a black man doing that to an elderly white woman, they would have escorted him off the flight,” Lawrence said. “He probably would have ended up in a Spanish jail even today.

Ryanair has since issued a statement:

Statement: We are aware of this video and have reported this matter to Essex Police

Them asking the innocent black woman to move seats sent a message to their black customers: we don’t matter. This man caused an uproar on the plane and was able to get what he wanted. The crew onboard should be ashamed for how this woman was treated. He presented a physical threat to the woman as he raised his hand at her and used racial slurs. His bigotry was accommodated and I hope no one buys a ticket to fly on this airline again.