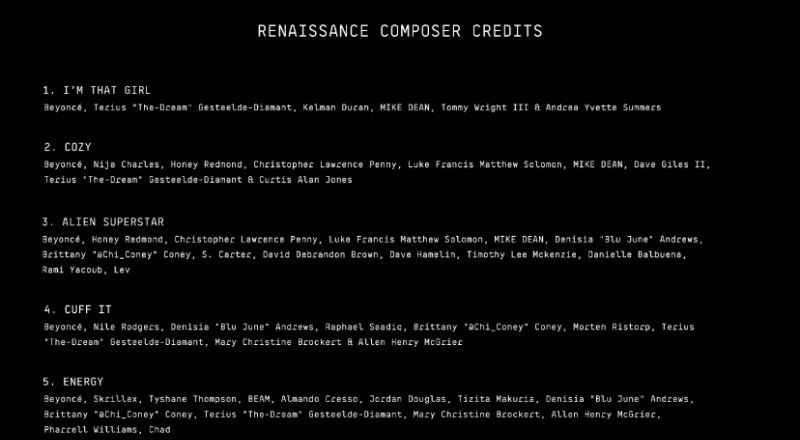 Beyonce has everyone holding their breath as the release of her seventh studio album Renaissance is close. Beyonce has been teasing the countdown via social media with fans awaiting any new updates. Earlier this week she released the song list for the album. She then followed up releasing the official composer credits list and the features are out of this world.

Beyonce’s first single from the album Break My Soul went viral as she posted her first TikTok using the song. Beyonce describes the album as “allowing her to feel free and adventurous in a time when little else was moving”. To add to this excitement is a one of kind star studded composer credit list.

Beyonce’s composer credit list is impressive to say the least. Not only did she seek out the best, she included some of the most influential artist out. The list includes JayZ, The Neptunes, Mike Dean, Drake , Raphael Saadiq, The Dream, Donna Summer, Lucky Daye, Tems and SYD. An interesting feature from Sabrina Claudio pops up, leaving fans curious to hear the entirety of the album. The project is set to release July 29th.

More in Audio
Ne-Yo reveals cheating and selfishness led to divorce talks, renewing vows, and new album, “Self Explanatory” with Nessa on Hot 97 [VIDEO]
Sheree Whitfield and Martell Holt are rumored to have been spotted together