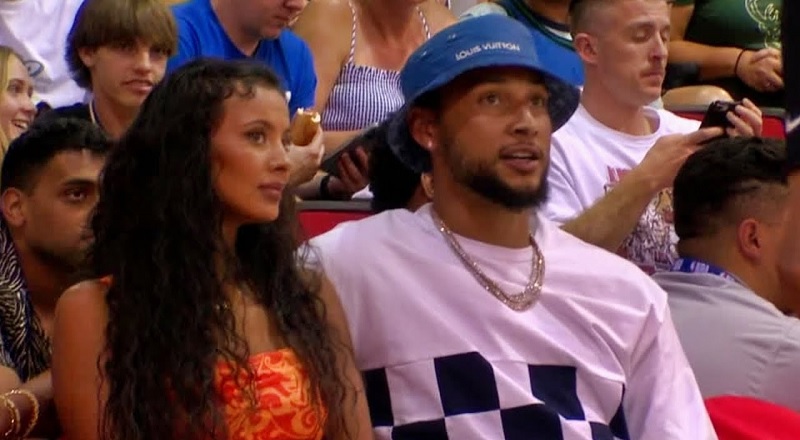 Ben Simmons is often the target of social media jokes. After the 2021 playoffs, these jokes heightened, as many blame him for Philly’s loss. However, he’s playing his role for the Brooklyn Nets now. Still, Simmons is facing jokes online. Recently, he and Maya Jama called off their engagement. As a result, social media is saying Simmons “fumbled the bag.” In actuality, he is securing it if reports of him demanding Jama return her $1 million engagement ring are true.

Ben Simmons was one of the most sought after NBA Draft prospects in decades. At one point, he was touted as the “next LeBron James.” In 2016, Simmons was drafted by the Philadelphia 76ers with the first overall pick. However, during the preseason, a season-ending injury pushed Simmons’ debut back by one year. Alongside Joel Embiid, Simmons led the Sixers to a 52-30 record and the second round of the playoffs. In 2019, they played a thrilling seven game series against the Toronto Raptors.

Ben Simmons sparked frustration from Sixer fans and NBA fans, alike, for his unwillingness to shoot. A player of his size, and skills, should have been doing more, in the eyes of critics. Off the court, Simmons has enjoyed the life of a young millionaire. He has had many women in his life, including Maya Jama. Until last year, the two were deeply in love, and Simmons was reportedly shocked when she left him. Seeing how she didn’t give him his $1 million ring back, Simmons has reportedly sent a legal document demanding Jama give it back.

More in Hip Hop News
SZA’s “Snooze” from “SOS” album reaches gold eligibility
NYC woman will lose her eye, after being attacked on the subway