Home » Hip Hop News » Chris Brown performs “No Air” with Jordin Sparks, during final concert of “One Of Them Ones” Tour, in Las Vegas [VIDEO] 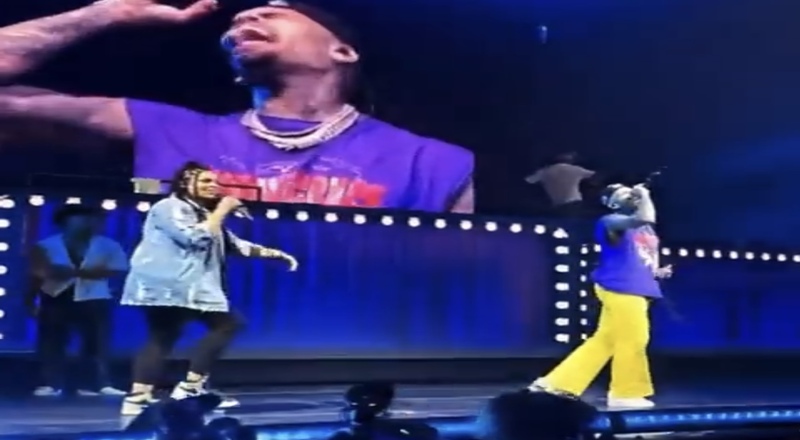 On Saturday night, Lil Baby and Chris Brown concluded their “One Of Them Ones” Tour, which kicked off this summer. This was held in Las Vegas, at the MGM Grand Garden Arena.

Baby and Brown definitely had Sin City lit, as Brown also brought another guest, during his performance. This was Jordin Sparks, as they performed their 2007 hit collaboration, “No Air.” This is also one of the few times that Brown and Sparks performed No Air together.

Sparks initially released No Air as a single, in February of 2008. That went on to peak at number three, on the Billboard Hot 100 chart. It’s also platinum in the US. No Air initially appeared in her self-titled debut studio album, in November of 2007.

Even though the One Of Them Ones Tour is now finished in the US, Chris Brown revealed earlier this week, that there’s a “strong possibility” that the tour will be heading to Europe. These dates and cities haven’t publicly been revealed yet, though.

Check out Chris Brown and Jordin Sparks performing “No Air” at the One Of Them Ones Tour in Las Vegas, below.

Omgggg Chris brown performed No air for like the 2nd time ever with Jordan Sparks on his last tour date in Vegas 😩😩😩 #OneOfThemOnesTour pic.twitter.com/Ee0zVL9lcM

More in Hip Hop News
Latto announces partnership with Planned Parenthood, after Roe V. Wade was overturned, this summer [VIDEO]
Duane Cali, the man who went to McDonald’s drive-thru with alleged monkeypox, says he lied about having monkeypox, to promote his music [VIDEO]