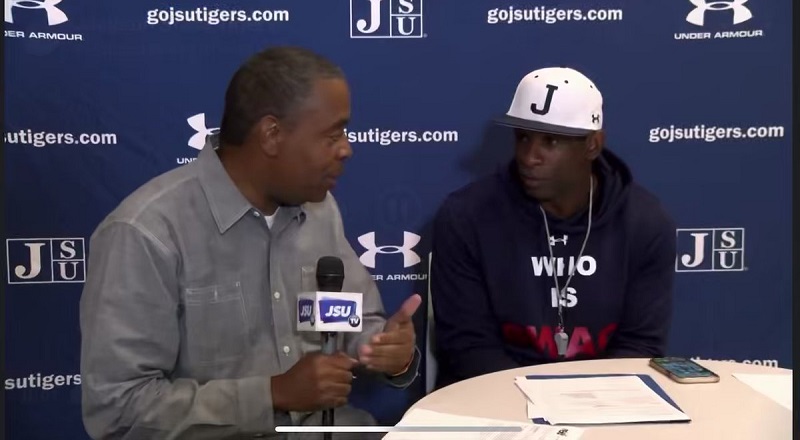 Deion Sanders has really been acting up, these past few days. Over the weekend, Sanders shoved Eddie Robinson after shaking his hand. In a pregame interview, Coach Prime is now putting the reporter on blast. When the cameras turned on, the man asked Deion a question. In turn, Deion asked him one. Using Sanders’ words “Can you come in how you normally sound?”

Deion Sanders built a reputation, in the NFL, as one of the most flamboyant players in the league. People like him are the reason the 1990s are so iconic. During the 1990s, Sanders had two classic cameo appearances on the sitcoms, “Moesha” and “Living Single.” Once his career was over, Deion Sanders was one of the first celebrities to have a successful family reality show. Since then, Sanders has returned to football as the head coach of Jackson State University.

Deion Sanders was sitting down for a pregame interview, when he put the interviewer on blast. Before the man could get his first question out, Coach Prime had a question for him. It turns out, Deion’s question would be a bigger soundbite. Sanders asked the man what happened to his voice, later asking if he can come in sounding how he usually does. As a result, the man told Sanders that he is trying to sound professional. In turn, Deion questioned if the man doesn’t think how he normally talks is professional.