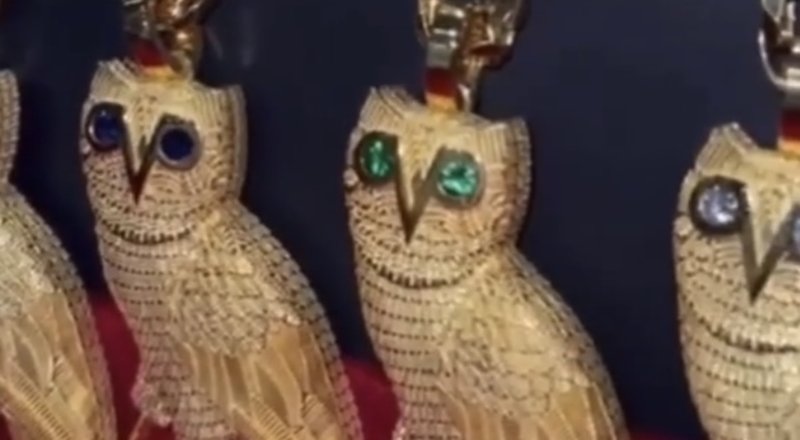 In June, Drake had a dominant month, as he put out his seventh studio album, “Honestly, Nevermind.” This was a surprise for everyone, as it ended up being a dance album. The only rap song on Honestly, Nevermind was “Jimmy Cooks,” featuring 21 Savage. That went on to debut at number one on the Billboard Hot 100 chart, as well as the album topping the Billboard 200. Drake did receive criticism for attempting to do a dance album, but went on to brush it off, by saying it’s okay if the people don’t “get it” right now.

Drake reportedly has another project coming this year, which is a third installment of his “Scary Hours” EP. The sequel was initially released last March, which had three songs, and all debuted in the top three of the Hot 100.

Now, Drake is showing off more OVO chains, that he’s added. These pieces are all OVO owls, which are the logo to his OVO record label. The eyes of the OVO owls are each made in different color diamonds, as well. These appear to all be made in the same gold, as well as the chains connecting them.

Check out a closer look at Drake’s new OVO chains, below.

Continue Reading
You may also like...
Related Topics:drake, featured, ovo

More in Hip Hop News
R. Kelly ordered to undergo mental health treatment after prison release, which includes treatment for sexual disorder, and avoid contact with anyone under 18
Iggy Azalea says she doesn’t care about anyone’s opinion, after rumors of her being on a date with Tory Lanez