Home » Hip Hop News » Family of three walks up to a woman in a grocery store, blocked her, and tried to steal her wallet right off her waist [VIDEO] 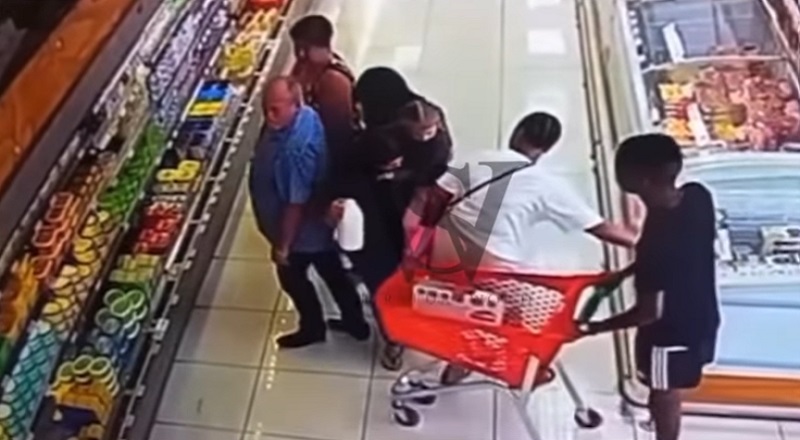 People have always done bad things, let’s be clear. However, people are more bold now than ever before. When people get into these stores, they do all kinds of things. Earlier this year, a man tried to take a woman’s baby, while she was shopping in the grocery store. In that case, the man said he was only joking, after he was caught. Now, there was another woman with a baby shopping. Some people noticed she had her wallet on her waist, so they blocked her in an attempt to take it from her.

Surveillance footage captured the whole situation, which lasted only a few seconds. The woman was walking down one of the main aisles. Meanwhile, the people noticed her coming. A group of three people, presumably a family, all moved towards her. It looks like one person was talking to her. Meanwhile, there was a man who pushed his cart in front her, which blocked her in. While she was stopped, another woman began touching her wallet on her waist.

Again, the entire ordeal only lasted a few seconds. Fortunately, for the woman, they were unsuccessful in their attempt to lift her wallet. However, the woman did not do anything afterward. The video shows her simply talking off with her baby. After that, the group of people pretended like they were shopping. The woman who tried to pull the wallet simply went and picked up a jug. She would place it in the same cart used to block the woman in.

More in Hip Hop News
Tory Lanez charged with felony negligent discharge of a firearm, as trial for Megan Thee Stallion shooting case begins; Tory has three felony charges in this case
Anthony Davis will miss the remainder of Lakers-Cavs game, due to flu like symptoms