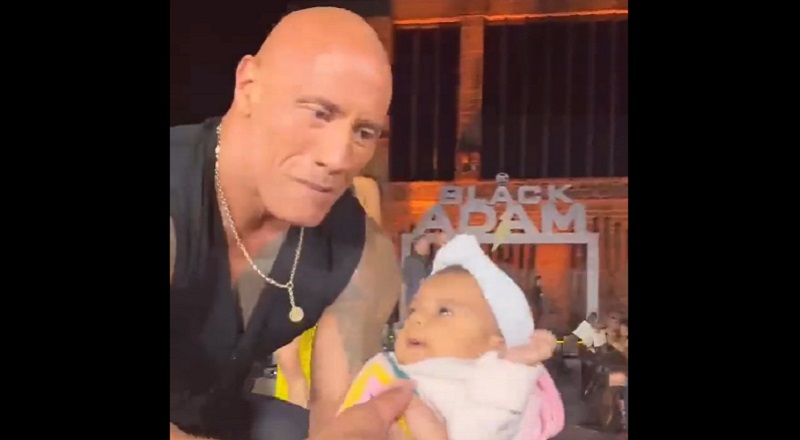 Dwayne Johnson has well over twenty five years in entertainment. Initially, Johnson rose to fame in the WWF as “The Rock.” Not only did The Rock become a popular wrestler, he had his own action figure. After that, The Rock transitioned into acting. For nearly twenty years, Dwayne Johnson has been one of Hollywood’s biggest names.

Dwyane Johnson became a part of The Fast and The Furious film franchise. Controversially, Tyrese called him out over this. While Johnson was the newest member added to the cast, he got his own spin off movie. As a result, the latest installment of the main film was pushed back. At the time, Tyrese claimed he was going through financial problems. According to his claims, he needed the check. With that being said, Tyrese blasted Johnson for “being selfish.” After that, they worked things out.

Dwayne Johnson recently did an event in front of a large crowd of people. Through the years, Johnson has amassed an incredibly large fan base. One fan wanted their newborn child to experience the memory of a lifetime. Even though the baby will never remember this, the world will never forget. The parents of this child apparently had their newborn child crowd surfed to reach Dwayne Johnson. People passed the infant until they made it into The Rock’s arms, where he briefly held the child.

The baby has no idea what’s happening 😭 pic.twitter.com/3iNxveqk9G

Continue Reading
You may also like...
Related Topics:dwayne "the rock" johnson, featured, the fast and the furious, tyrese

More in Hip Hop News
Kim Kardashian gets booed by crowd at Cowboys vs. Rams game [VIDEO]
White kid gets threatened and insulted for holding Black Lives Matter sign in Arkansas and he was forced to leave a Walmart parking lot [VIDEO]