Home » Hip Hop News » Female McDonalds employees get into a huge physical fight, while customers in the drive thru look on [VIDEO] 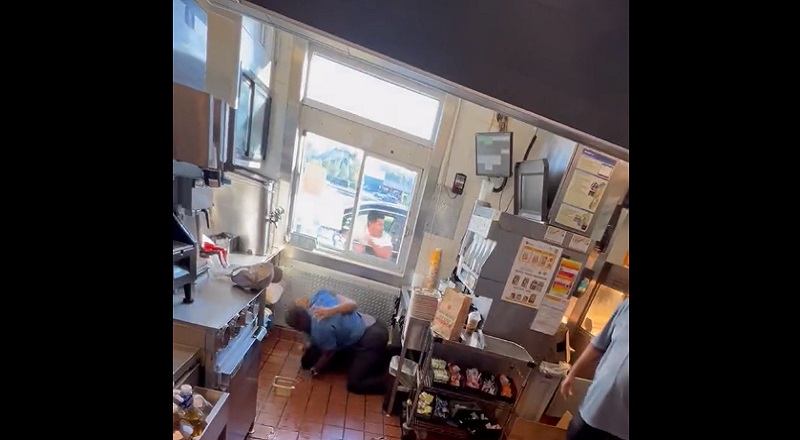 Working a job, especially in the service industry, can become stressful. During this time of year, everybody is adding a bit of stress to everything. The people are working in order to make the holiday season extra special. Meanwhile, the customers are in a rush to get what they need, so their day can go well. As a result, sometimes high tensions boil over, and emotions can run hot. Recently, a McDonalds saw two women working there get into a major fight. It has trended on Twitter ever since.

It is hard to be on the job, as the people working may or may not get along. While it’s true that co-workers do not have to be friends, it is preferred that they get along. Unfortunately, that’s just not how life works, all of the time. Even though that’s the case, there may be situations where people can work alongside each other, while disliking one another. However, there is a huge risk of the people actually getting into it.

On Twitter, a video has gone viral of two McDonalds cooks fighting in the kitchen area. The two women had a knock out, drag out, fight. Their altercation was complete with hair pulling and they wound up on the ground. While their co-workers tried to break them up, the person filming the situation can be heard telling them to let the ladies keep fighting. Meanwhile, there were people in the drive thru, poking their heads out of the car to see what was going on.

More in Hip Hop News
Kanye West walks off in the middle of Tim Pool interview, because he refused to call the media out by name [VIDEO]
Future’s “Wait For U” featuring Drake and Tems was most streamed song on US Apple Music, in 2022