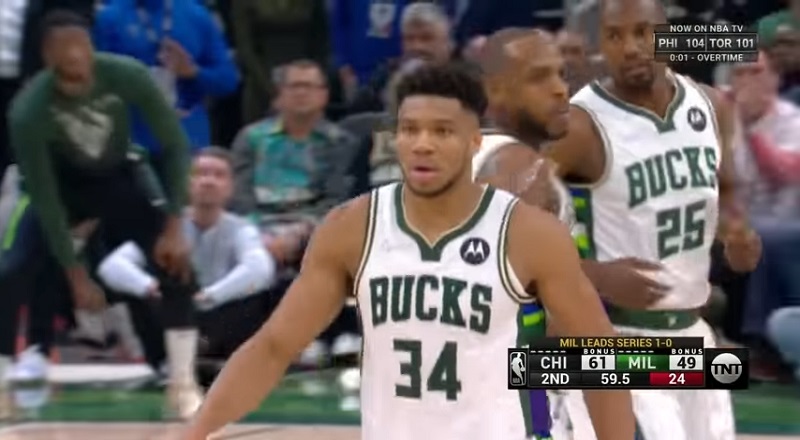 Giannis Antetokounmpo proved himself to be the greatest Milwaukee Bucks player of all-time, last year. When Giannis was bringing the Bucks their first title in fifty years, Kareem Abdul-Jabbar came to watch him. Kareem and the rest of the living 1971 Bucks’ roster were present.

Giannis Antetokounmpo has come a long way, over these past nine years. When Giannis was in Greece, scouts were aware of his potential. But for Giannis to translate his game to the NBA wasn’t a guarantee. Still, the Milwaukee Bucks decided to draft Giannis, and he became a role player.

Giannis Antetokounmpo became the Bucks number one option during the 2016 season. The Bucks disappointed, when they missed the 2016 playoffs. When Giannis asserted himself, he made sure the Bucks would remain a playoff team. In 2017, Giannis returned the Bucks to the playoffs. After the Bucks suffered tough first round losses to the Raptors and Celtics, Giannis delivered an MVP season. Not only did Giannis win MVP, he led the Bucks to the NBA’s best record.

Giannis Antetokounmpo led the Bucks to the NBA’s best record in 2019 and 2020. Both seasons saw Giannis win the league MVP. However, 2019 saw Giannis’ Bucks lose in the Conference Finals to the Raptors. In the 2020 bubble, Giannis’ Bucks were upset by the Miami Heat in the second round. Last year, Giannis made sure nobody stopped the Bucks. They defeated the Phoenix Suns to win the title. This season, the Bucks are playing the Chicago Bulls in the first round. Despite the Game 2 loss, Giannis became the all-time leading scorer, in the playoffs, for the Bucks franchise.

More in Hip Hop News
Kris Jenner claims Tyga said Blac Chyna threatened to kill Kylie Jenner, when she testified in court
CupcakKe says the industry doesn’t support black women and is anti-black, regardless of whether they drop a good song or a bad song