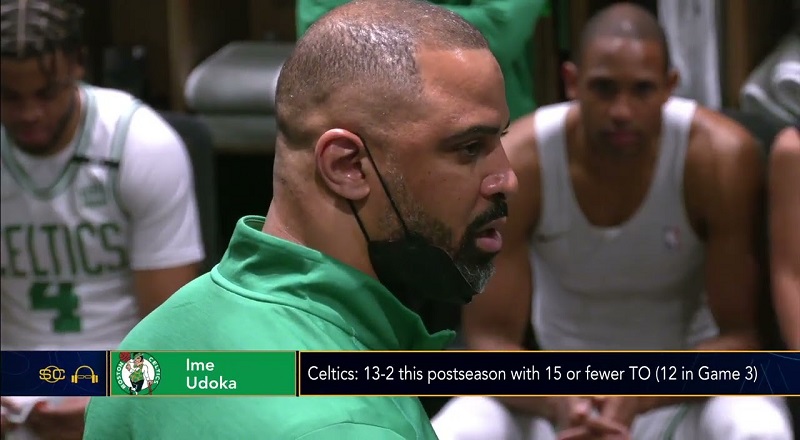 Ime Udoka was one of the most popular figures in the NBA, just months ago. Last year, Udoka was hired as the head coach of the Boston Celtics. Following a few disappointing seasons, the Celtics sought to get back on track. In his first year, Ime Udoka coached the Celtics to the NBA Finals. A day ago, he also became embroiled in a cheating scandal.

Ime Udoka helped Jayson Tatum and Jaylen Brown form a potent duo. The two have played together since 2017. Having that kind of history means they already had good chemistry. Udoka simply gave them the keys to lead the team. As a result, the Boston Celtics stormed through the second half of the season to reach the NBA Finals. After that, they lost to the Golden State Warriors.

Ime Udoka was accused of having an inappropriate, consensual relationship with a member of the Boston Celtics’ staff. This meant Ime Udoka cheated on his high profile significant other, Nia Long. In addition, the fans identified the wrong woman as his other woman. With that being said, Ime Udoka was given a one year suspension from the team. After that, Richard Jefferson questioned why Udoka’s suspension was so long, if the situation was consensual. Now, Udoka has released a statement apologizing to his family and the Celtics organization, accepting his suspension.

More in Hip Hop News
Swizz Beatz and Timbaland reach settlement, after suing Triller for $28 million, due to payments not being received, for purchase of Verzuz
GloRilla, Moneybagg Yo, Pusha T and more to perform at BET Hip-Hop Awards; Trina set to receive “I Am Hip-Hop” award