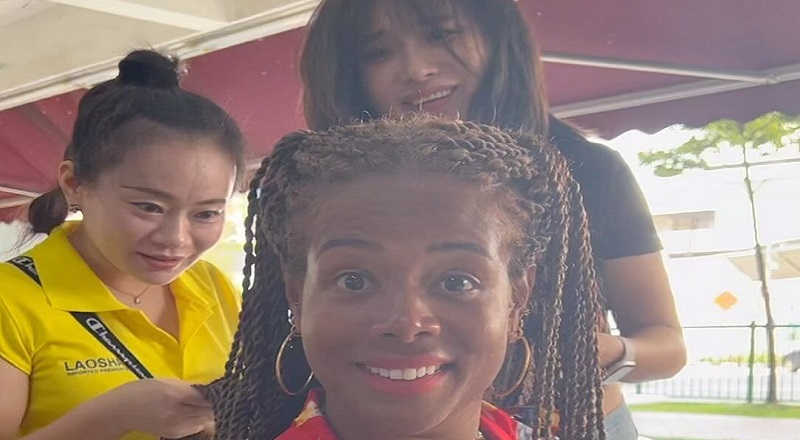 Kelis lets random people in Singapore play with her hair

Kelis will forever be known for her 2003 single, “Milkshake,” which topped Billboard. From that moment on, Kelis slowly faded from the spotlight. During that time, she had a high profile divorce from Nas, which inspired Life Is Good. Since then, Kelis married again, and dealt with her husband’s passing. The last time Kelis made headlines, it was over her disagreement with Beyonce.

Kelis is one of the most talented musicians in the game. At the same time, she has also marched to the beat of her own drum. Her success on “Milkshake” makes it obvious that Kelis could have had more mainstream success. In addition, she has sang backup on many other classic records. Clearly, Kelis is not a person who really wanted to be in the spotlight. Since her split from Nas, Kelis has maintained a relatively low profile.

Kelis recently was in Singapore, where she encountered two women. Apparently, these women have never seen anyone who looks like Kelis. When the ladies saw her hair, they could not get enough of it. After meeting Kelis, the women immediately began grabbing her hair. While they were doing this, Kelis looked into the camera and made the above face. The look on Kelis’ face says it all about her opinion on what’s taking place.

Kelis lets random people in Singapore play with her hair

More in Hip Hop News
Family returns to their home to find squatters living there who refuse to leave [VIDEO]
White woman starts heated argument with Black women at the airport, which leads to a major altercation [VIDEO]