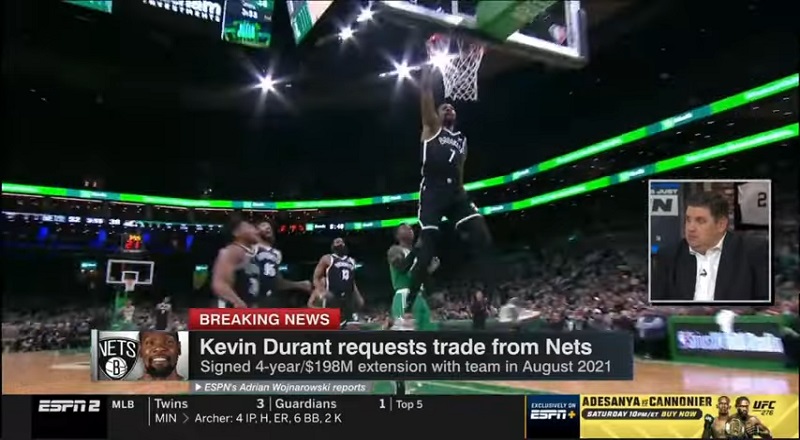 Kevin Durant has requested a trade to leave the Brooklyn Nets. This comes three years after Kevin Durant arrived, via a sign and trade. In 2018, Kevin Durant was fresh off winning two titles with the Golden State Warriors. As they tried to threepeat, the Warriors began having friction between teammates.

Kevin Durant and Draymond Green had a public argument, during one game. After this game, fans correctly predicted that Kevin Durant would leave the Warriors in free agency. At the same time, Kyrie Irving was in his second year with the Boston Celtics and things were not working out. As a result, he signed with the Brooklyn Nets in 2019, and Kevin Durant followed.

Kevin Durant and Kyrie Irving were joined by James Harden. On paper, the Nets were one of the NBA’s best teams ever. In actuality, the “Big 3” had a hard time staying on the floor together. As a result, James Harden was traded. This year, injuries slowed the team to a 43-39 records, having to compete in the play-in, and getting swept by the Celtics. Ironically, KD’s former Warriors played Kyrie’s former Celtics for the title. Now, Kevin Durant is reportedly wanting to be traded to the Phoenix Suns. With that, rumor has it that Kyrie Irving will also be traded.