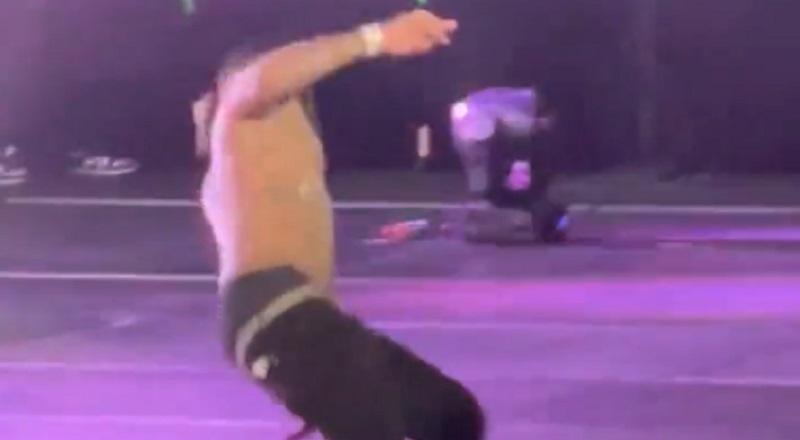 Kevin Gates slips and falls on his own sweat during concert

Kevin Gates is one of several rappers to have revived their careers via social media. While other guys have just been speaking on relevant topics, Kevin Gates is doing outrageous interviews. In addition, he is saying wild things on songs. Gates did a freestyle, where he said his girl cheated with a woman, and it went viral. As a result, he got Brittany Renner to star in his music video.

Kevin Gates has done interviews and viral videos, where he speaks on how to treat women. One thing Gates often trends for is his take on how to start a car battery. A lot of what he says ends up being taken literally by the people. As a result, Kevin Gates’ phrases end up becoming a regular part of the dialogue. Furthermore, this gives people even more reasons to come to his concerts, where he always puts on a show.

Kevin Gates has been showing off his weight loss, lately. In his recent concerts, Gates is rocking his extremely skinny jeans, with his shirt off. Even more recently, Kevin Gates has been doing his jump dance, which has been going viral. Last night, he was in Pensacola, Florida, where he was getting hyped, and doing his jump dance. This time, Gates got into a little bit more than he anticipated. After doing his jump, Kevin Gates went to do the rest of his performance, but ended up slipping. Gates got into his own sweat, and fell right at the front of the stage.

Kevin Gates slips and falls on his own sweat during concert

Kevin Gates fell on stage in Pensacola. I'm starting to think it's a part of his shows now as much as he keep failing lol. #kevingates #memeunit #Pensacola pic.twitter.com/xwlpltuHyb