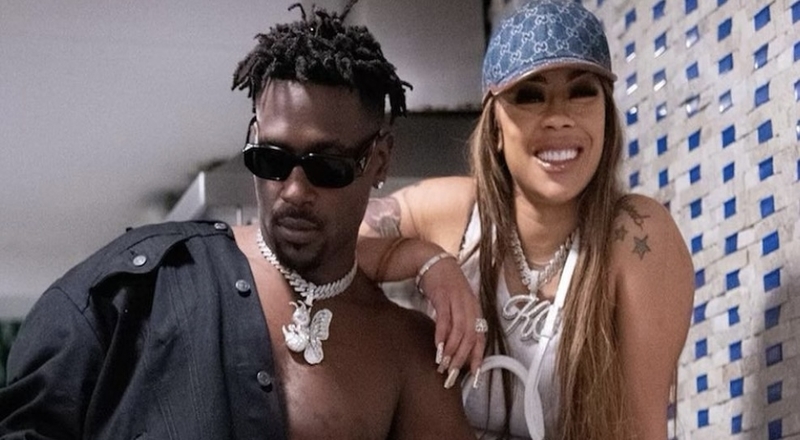 Keyshia Cole and Antonio Brown have made it known that they’ve been dating, over the past month. Antonio Brown initially put Keyshia on his new hip-hop album, “Paradigm,” last month. Keyshia appeared on the “Don’t Leave” single.

Keyshia has since gotten an “AB” tattoo, which she received criticism for, on social media, over the weekend. Antonio Brown went on to post a video of the tattoo on his Instagram, as his caption was “You ain’t pimpin until you hit an RnB diva.” This was in apparent reference to Keyshia.

On Monday night, Keyshia also appeared in an Instagram Live session, with celebrity stylist, EJ King. there, Keyshia explained how the caption was “a little harsh,” but also revealed that she relates to Antonio Brown, in many ways.

“Let’s keep it gangsta! You know what, I saw a Black man that is going through the motion. I’m not a Black man, but I identified with how [unintelligible] can be. He might not care about that, I don’t know. I don’t know, you know what I’m sayin’?”

“I think he made it very clear that he didn’t want to receive it. He was like, ‘Baby I like you,’ at first and now,” Keyshia continued. “I think maybe that’s just what it is. My point wasn’t even for that to be like, for us to discuss that more. It was just that—it was harsh. It was a little harsh… Maybe he don’t know that it was a little harsh for him to say that.”

This all comes after Antonio Brown was cut by the Tampa Bay Buccaneers, in January. This was due to AB leaving in the middle of a game vs the New York Jets. AB claimed that he was being forced to play on an injured ankle. Antonio Brown has also since become the president of Kanye’s “Donda Sports” brand.