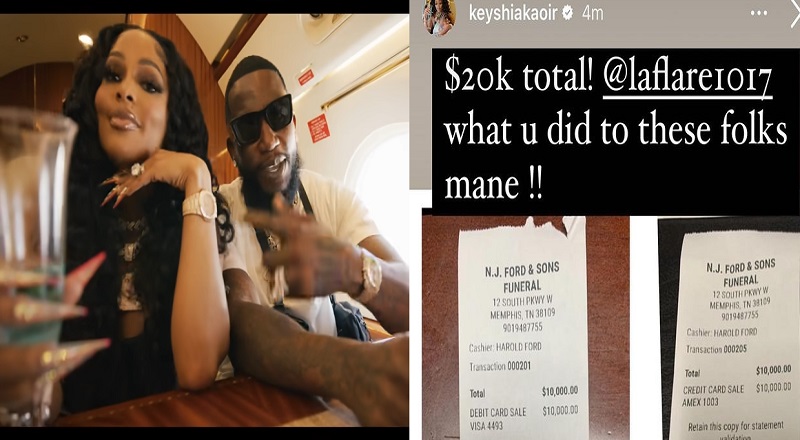 Keyshia Ka’oir is credited for saving Gucci Mane’s fortune. When he went to prison, Gucci reportedly left $3 million to Keyshia. While he was away, Keyshia reportedly turned that $3 million into $30 million. As a result, Gucci Mane returned in a stronger position. At the end of 2022, Gucci dealt with the passing of Big Scarr. After promising to pay for the funeral, Gucci was accused of lying about paying for the funeral. As a result, Keyshia Ka’oir is speaking out in defense of her man.

Keyshia Ka’oir has risen to become one of the most popular influencers on social media. Unlike a lot of these ladies, Keyshia actually owns her company. In addition, Gucci has a strong position as one of the label owners in hip hop. Prior to his 1017 Eskimo label, Gucci had a large roster of artists. While all of them left Gucci, almost all of them have found major success. This was a major reason for his current crop of artists signing to him.

Keyshia Ka’oir watched while Big Scarr’s friends and family ran Gucci Mane’s name down. While they accused Gucci of lying about paying for the funeral, Keyshia found the receipts. In her IG Story, Keyshia Ka’oir shared actual receipts of payments Gucci sent to the funeral home. After that, she shared how the people close to Big Scarr treated Gucci. She said they paid for the funeral and sent flowers. However, Big Scarr’s family didn’t even send a “thank you” in response.

More in Hip Hop News
Gucci Mane gets put on blast by Big Scarr’s friend, who said Gucci was unreachable on the day of his funeral, after saying he would pay for the entire funeral
Kanye West spotted with mystery woman, after many believed he went missing