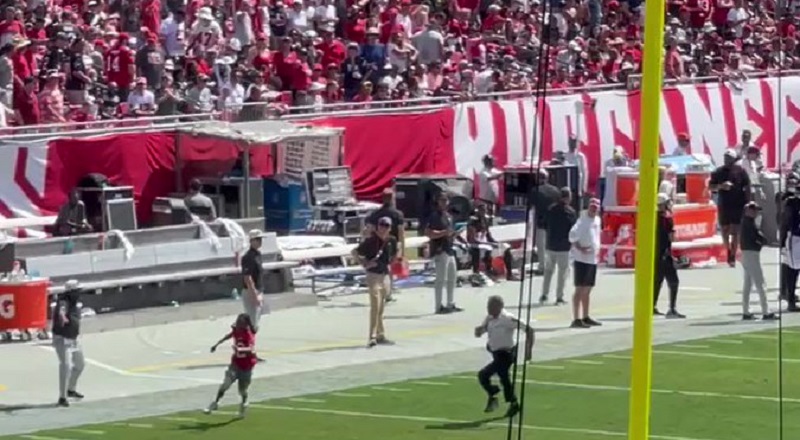 Kid gets tackled by security during Tampa Bay Bucs game

From the fans to the coaches, people are acting up at football games. Currently, the Tampa Bay Buccaneers are leading the NFC South. After losing two of their first three games, the Bucs have won two straight games. Yesterday, the Bucs took on the Atlanta Falcons. Somehow, this wasn’t the big news, however.

Lately, football games have been interrupted by people who have been protesting. Last week, an animal protestor ended up being brought to the ground by an NFL player. As a result, the NFL play of the week involved a player and an animal rights activist. After that, this weekend, the Tampa Bay Buccaneers’ matchup against the Atlanta Falcons had a viral play that had nothing to do with the game.

A young boy somehow managed to get on the field. Apparently, the adult supervision was not paying any kind of attention to the little boy. After all, the boy ended up on the football field. As a result, the security had to remove him. It was all fun and games for the child, until the security caught up with him. After that, the boy was tackled to the ground, and removed from the field. Thus far, the 2022-2023 NFL season has been filled with shenanigans.

Kid gets tackled by security during Tampa Bay Bucs game

What kind of parent lets their kid run on to the field? Smh… #gobucs pic.twitter.com/S3GkCu2vuT