Home » Hip Hop News » LeBron James tells Draymond Green he needs his assistance, in the middle of the Warriors blowing the Lakers out out; Andre Iguodala makes gesture in response to this [VIDEO] 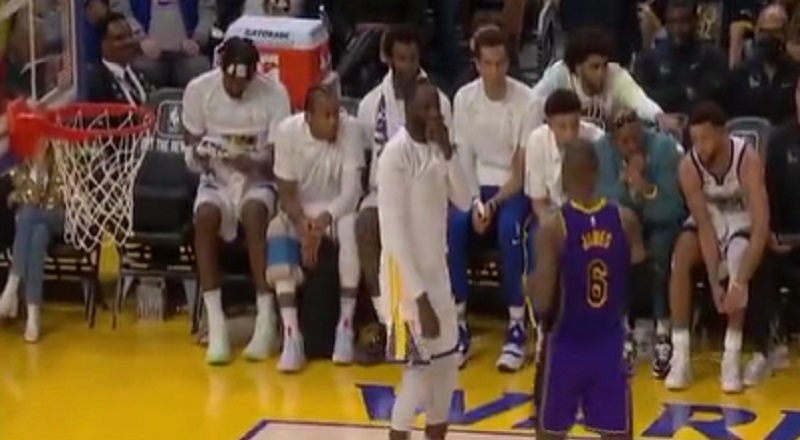 LeBron James entered the NBA and was instantly compared to Michael Jordan. Later years, were defined by his rivalry with the Golden State Warriors, especially Draymond Green. The year LeBron joined the league was the year Jordan retired for the final time. While fans expected LeBron to emulate, or exceed what MJ did, it did not turn out this way. Soon, LBJ got the stigma of being unable to win a championship. When LeBron left Cleveland for the Miami Heat, he soon changed this perception.

LeBron James’ name is almost synonymous with winning, nowadays. Not only did James play in eight straight NBA Finals, he also went two other times. James’ legacy is one of his own, as he’s played for three teams, doing two stints with the Cleveland Cavaliers. In each city, James has won at least one championship. The total is four NBA championships, complete with the Finals MVPs. In addition, James’ ten NBA Finals appearances are more than Michael Jordan and Kobe Bryant, who he was often compared to. With his teams, LeBron is known for recruiting players. Since his Lakers have struggled so badly, it looks like he’s recruiting mid-game.

LeBron James’ Lakers look like they will have another long season. Last night, Stephen Curry and the Golden State Warriors had their ring night. After that, they began blowing the Lakers out. At the end of the third quarter, the Lakers were down by 27 points. During that time, LeBron walked over to Draymond Green and joked about needing his assistance. Already, Green is facing backlash over the Jordan Poole incident. Add to that, him joking with LeBron, and Andre Iguodala made a gesture in response.

Nah, this is crazy. pic.twitter.com/ECM9DxrtT5