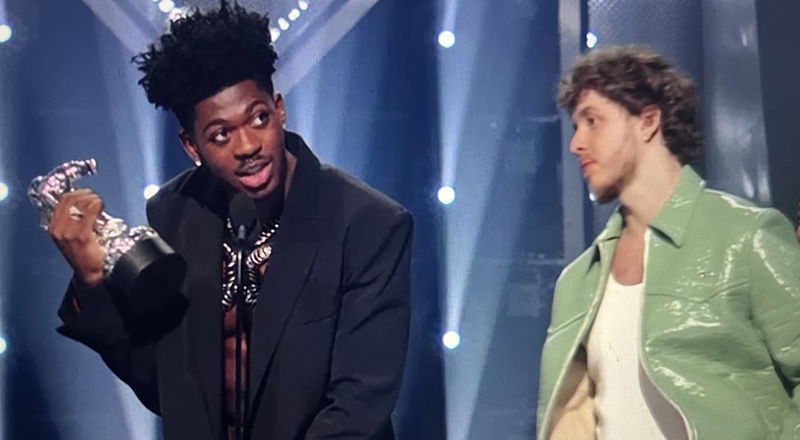 The 2022 MTV VMAs are currently taking place at the Prudential Center, in Newark, NJ.  The first award of the night just got handed out, which was for Best Collaboration.

Best Collaboration went on to be presented to Lil Nas X’s chart-topping “Industry Baby” single. This also featured Jack Harlow, who is also another one of the biggest artists in the industry. Harlow also joined Nas X on stage at the VMAs, to thank everyone for their support, on Industry Baby’s success. This came after Harlow performed his number one hit single “First Class,” with Fergie. Nas X and Jack Harlow are also tied with Kendrick Lamar, as the most nominated artists, at this year’s VMAs.

This collaboration was released in August 2021, and debuted at number two in the US. A month later, it reached the top spot on the Billboard Hot 100 chart.

In September, Industry Baby also appeared on Nas X’s debut studio album, “Montero.” That debuted at number two, on the Billboard 200 chart. Next month, Nas X will also be venturing on his Long Live Montero Tour, which will kick off on September 6, in Detroit. It will conclude on November 17, in Barcelona, Spain.

.@LilNasX and @jackharlow just won Best Collaboration at the #VMAs, and they could hardly believe it pic.twitter.com/Aq1Qh0njed

More in Hip Hop News
Ari Fletcher is reportedly being sued, after not paying lease for Lamborghini truck that Moneybagg Yo got her, which supposedly recently got repossessed
Jack Harlow brings out Fergie to perform “First Class” and “Glamorous” at #VMAs [VIDEO]