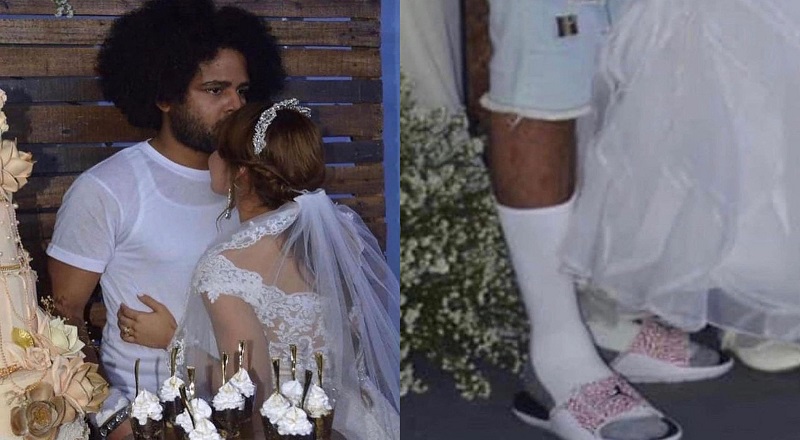 One thing is for sure and two things are for certain. People are going to do them, no matter what. How people go about doing that still boggles the mind. There is a man that is currently going viral on both Facebook and Twitter for his wedding. No, people aren’t consumed with him marrying his wife. Instead, they are taken aback for this man showing up to his own wedding with a t-shirt, jean shorts, Nike socks pulled up to his knees, and some Nike slides. Meanwhile, his bride had on the traditional white dress.

There have been an increasing number of people who are dressing down for weddings. It isn’t too uncommon for people to show up to their own weddings wearing casual clothes. However, when people choose to do that, both the bride and groom dress down. When one half of the marrying couple shows up dressed like he’s going to play ball today, that might be a cry for help. The comments on social media have people believing just that.

When the people on social media saw the full attire that this man had on, all they could do is laugh. As a result, people are in the comments adding all kinds of jokes. What makes the situation even worse is the expression on the guy’s face. From the looks of things, it is obvious that he isn’t looking forward to matrimony with his wife. With that being said, the gentleman has a lovely new wife, and they have beautiful daughters.