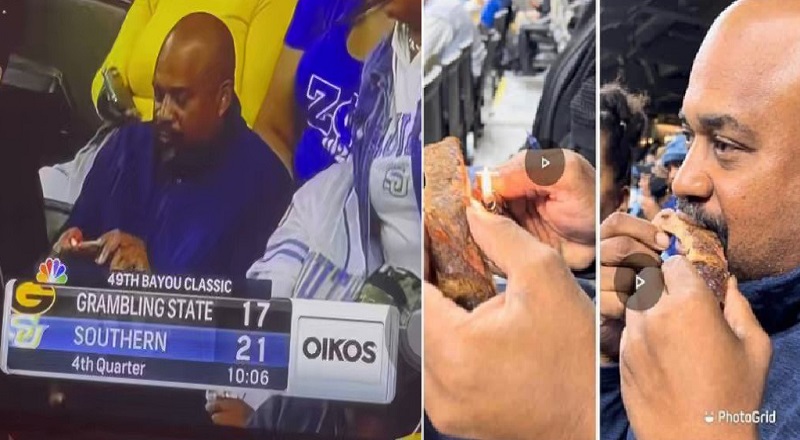 Man uses lighter to warm a rib during Bayou Classic

This morning, the Bayou Classic football game in New Orleans aired on television, as the people in town are causing drama. During one of the commercial breaks, viewers noticed a man with a lighter. From how he was handling the lighter and the other item in his hand, some believed he was burning one live on television. As a result, the man and the situation have been trending on Twitter, all day. However, there was more to the story, when it all came out.

Within the culture, there is always something going on. It is overly common that people end up doing something, in a public setting, that goes viral. The idea of somebody lighting up during the Bayou Classic was classic. Again, just the thought of this was enough to make the people on social media begin talking. As a result, the unnamed man in the video became an overnight celebrity. It turns out, there was one person who zoomed in.

So, it can be confirmed that the man was definitely lighting up during the Bayou Classic. Sorry to disappoint, though. This was no kind of contraband. Instead, this was a fried rib that the man brought along to eat during the game. Apparently, the rib ended up getting cold, and this man was not going to eat a cold rib. As a result, the man ended up pulling his lighter out in an effort to heat up his rib, not knowing he would go viral in the process.

Man uses lighter to warm a rib during Bayou Classic

More in Hip Hop News
White man goes viral turning up during Lil Baby concert and dancing, while his wife watches him, emotionless [VIDEO]
Terrell Owens knocked a man out in front of a CVS for harassing people [VIDEO]