Home » Hip Hop News » Man crashes dump truck into his own home to punish wife, who filed for divorce [VIDEO] 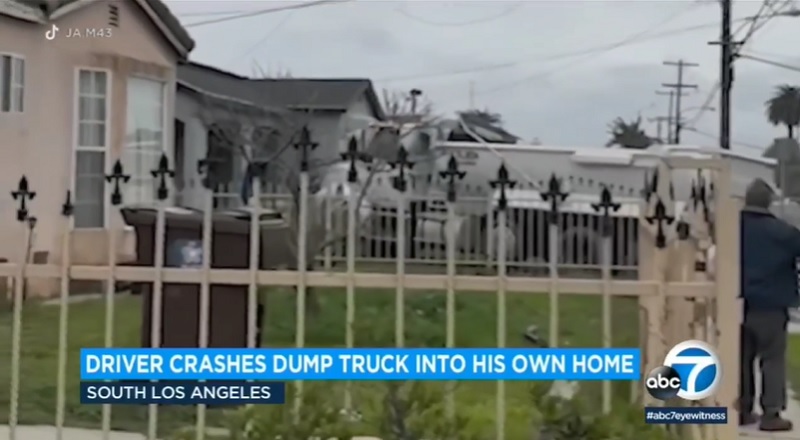 Man going through divorce drives dump truck into his own home

Marriage isn’t easy and divorce isn’t easy. A message is recirculating on social media that is urging people to “choose your hard.” While that’s a good message to share in theory, it becomes a different animal in practice. If things were so simple, this Los Angeles man wouldn’t have crashed a dump truck into his own home. Then again, Will Smith said love can make a person do some crazy things.

“Crazy” is an understatement, when a person goes as far as destroying their own home. After the man crashed the truck into his house, his wife spoke out. She confirmed the man was her husband and that they are going through a divorce. Also, she questioned his judgement, if he could so something like this, asking what else he could do.

The man’s wife said he crashed into the house, intending to hit her bedroom. As a result, the woman says she fears for her life. In addition, the neighbors have been trying to comfort the woman, as she deals with her unhinged estranged husband. Before crashing the house with the truck, he crashed his Chevy Impala into the house.

Man going through divorce drives dump truck into his own home

Continue Reading
You may also like...
Related Topics:featured, viral news, will smith

More in Hip Hop News
Trippie Redd reveals tracklist for upcoming “Mansion Musik” album; Features include Travis Scott, Future, Lil Baby, and more
Russell Westbrook tells the Lakers’ coaching staff they have to be better, during the middle of the game [VIDEO]