Home » Hip Hop News » Mike Tyson hangs out with Rick Ross and Ric Flair at Benzinga Cannabis Capital Conference afterparty at LIV, after fight with man on his flight [VIDEO] 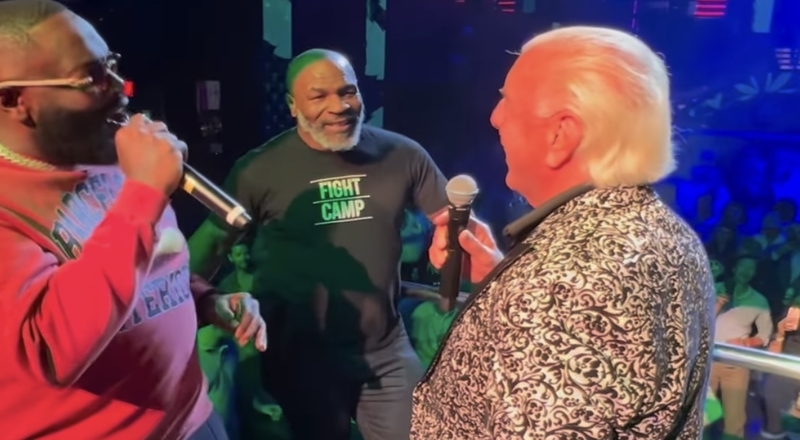 Mike Tyson went viral, due to a fight he go into on his flight yesterday. This was when Mike Tyson was traveling from San Francisco to Miami. Mike Tyson had been taking photos with fans and speaking with them. One man in particular supposedly got his selfie, but constantly started talking to Tyson, behind his seat. A water bottle was supposedly even thrown at Mike Tyson.

Mike Tyson soon began repeatedly punching this man, and soon left the plane. The victim was visibly bloodied, as it’s still unclear if charges will be filed. Mike Tyson ended up getting a new flight, to head to Miami.

Mike Tyson had fun in Miami once he got there though. Tyson attended the Benzinga Cannabis Capital Conference afterparty. There, Mike Tyson was met on stage with Rick Ross and Ric Flair, at LIV, which is one of the most popular nightclubs in Miami. Afterward, Mike Tyson was reportedly supposedly to speak at the conference earlier in the day with Flair, but that got delayed, due to Tyson having to get a new flight, according to TMZ.

Tyson reportedly took photos with fans at this afterparty event as well, as he didn’t seem bothered by what he went through, in San Francisco. Tyson met with these fans outside of a hotel. Check out Tyson at LIV with Ross and Flair here.