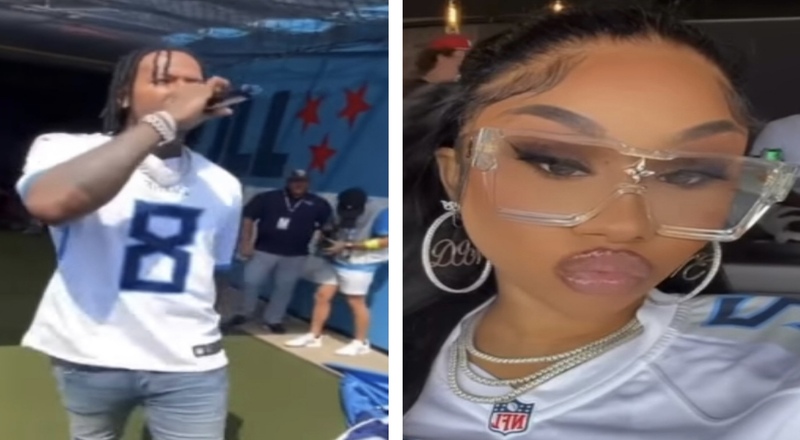 Moneybagg Yo and Ari Fletcher go to Tennessee Titans game

On Sunday afternoon, Moneybagg Yo attended his home team Tennessee Titans’ home game, vs the Las Vegas Raiders. Tennessee went on to earn a big 24-22 win, to improve to 1-2. Titans will face the Colts in Indianapolis, next week.

Prior to the game, Moneybagg led the Titans in the tunnel, before kickoff. The Memphis rapper also sported his own Tennessee jersey, while performing “See What I’m Sayin.” In addition to him coming out with the Titans, Ari Fletcher joined him at the game. This comes after speculation that the two broke up, this month, after Ari said on Twitter, that she is now single. The two have been together since 2019, and in plenty of on and off breakup rumors. Nonetheless, Ari and Moneybagg are never shy to show each other off on social media.

Last week, Ari also celebrated Moneybagg’s birthday. He also showed Ari love, by applauding her for being featured in Forbes, as a top influencer. Bagg was also rumored to have repossessed the Lamborghini truck, that he got Ari for her birthday, in July. Documents surfaced that the vehicle was possessed, but wasn’t labeled on if Moneybagg was responsible for that.

Check out Moneybagg Yo and Ari Fletcher at the Tennessee Titans game, below.

More in Hip Hop News
REVOLT Summit x AT&T 2022 kicks off annual weekend with iconic lineup of panels, performances, and networking, in Atlanta
A$AP Rocky apologizes for being late to Rolling Loud set, and only performing a few songs