Home » Hip Hop News » Moore County, NC has 40,000 residents without power, after three substations were shot up, in alleged response to a drag show 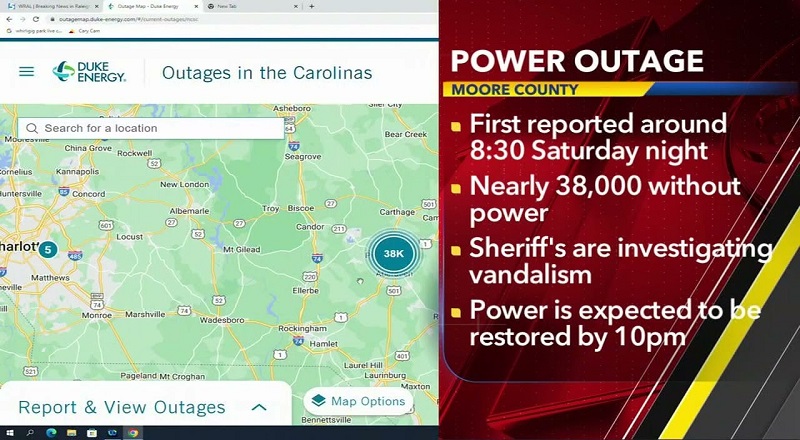 Moore County NC left without power after substations were shot up

One county in North Carolina was left without electricity, last night. Moore County, which is located just outside of Raleigh, North Carolina, had nearly 40,000 residents left without electricity. A couple of months ago, the city of Raleigh was placed under lockdown, as a shooter was wreaking havoc on the city. Now, Moore County is dealing with their electricity substations being the targets of shooters. As a result, the residents took to social media to speak out.

Only the Duke Energy substations were targeted in these shootings. As a result, there were 38,000 people who did not have power. However, Duke Energy has 47,000 customers, so this left all of their Moore County customers, with the exception of 9,000 people without electricity. After receiving complaints, the Moore County Sheriff Department spoke out. It turns out, the electricity substation shootings were acts of intentional vandalism.

Duke Energy released a statement, stating they did not know when the power would fully be restored. However, according to Moore County residents, on Twitter, the shootings may have taken place due to some kind of drag show that was set to take place. One woman took to social media saying Moore County’s electricity was out, and she knew why. Later, she posted a photo of the drag show, and she captioned it “God will not be mocked.”

Moore County NC left without power after substations were shot up

More in Hip Hop News
Travis Scott performs at E11EVEN Miami, during Art Basel week [VIDEO]
Bankroll Freddie is looking to get his jewelry back that were seized by authorities, as he’s still in jail for federal drug and firearm case