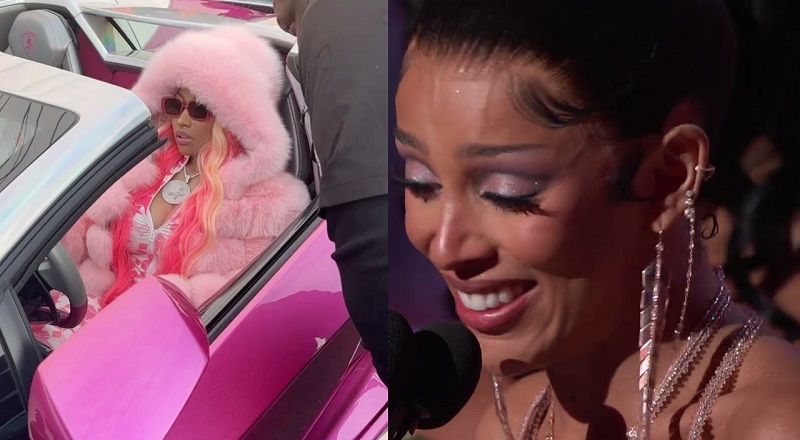 Nicki Minaj dominated the female rap lane for almost a decade. Through most of that time, Nicki Minaj was the only relevant female rapper out. However, starting in 2016, a crop of rising female rappers took over the game. Doja Cat is among them, even though a lot of people say she isn’t really a rapper.

Doja Cat put in a lot of work, over the years. However, Doja Cat didn’t rise to fame until 2018. That year, Doja Cat dropped “Juicy,” her single featuring Tyga. “Juicy” did enough to put Doja Cat on the map. A year later, Doja Cat collaborated with Nicki Minaj. Doja Cat and Nicki Minaj collaborated for “Say So,” which topped Billboard Hot 100 in 2020.

Last year, Doja Cat and SZA dropped “Kiss Me More,” which also dominated radio. Doja Cat released “Kiss Me More” last summer and it became an anthem. Despite the success, Doja Cat vented and said she is soon going to retire from making music. However, Doja Cat is still handling her responsibilities, so she was at the Grammys, where she won. After her win, Nicki Minaj shared her congratulating Doja Cat over text via her IG Story.

More in Hip Hop News
The Game calls out Regina Hall for clowning LeBron James’ hairline at the Oscars; Game compares the joke to Chris Rock and Will Smith
TDE President Punch, shuts down fans’ assumptions that SZA is lying, about having a broken ankle