Home » Hip Hop News » Black woman, nursing student, gets dragged by Twitter for bragging about dating a felon with no legal job [VIDEO] 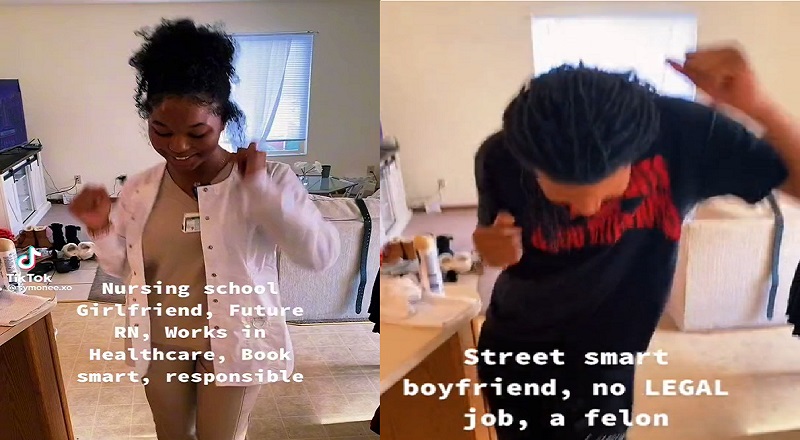 Nurse dragged on Twitter for dating felon with no legal job

Relationships come in all shapes and sizes. When it boils down to it, people cannot help who they fall for. In this social media era, everybody has a platform. As a result, everybody is talking about everything. At the forefront, there are people talking about their relationships.

Particularly, when it comes to gender, there are many people using social media to speak on that. People previously associated with being straight publicize romances with people of the same gender. Also, more prominently seen with Chrisean Rock and Blueface, people promote struggle love.

Now, there is a young Black woman who has a lot going for herself. As a nursing student, she has a bright future ahead of herself, in the field of nursing. Meanwhile, her boyfriend appears to be her complete opposite, in all of the worst ways. This young man is a felon with no legal job. In a TikTok video, the woman put together a video showing herself and her man off. As a result, the video has fallen under much scrutiny. People are questioning why the woman is even with this man, let alone bragging about his life choices.

Nurse dragged on Twitter for dating felon with no legal job

Shes laughing through her pain lmaoo I mean come on look at that apartment pic.twitter.com/CGtXtmlJaZ

More in Hip Hop News
Lori Harvey trends on Twitter, after rumors of her having a tape leak; Some fans downloaded a virus from a bogus link claiming to have it
Dr. Dre opens up about brain aneurysm he suffered in January 2021; Says his family came to hospital to say final goodbyes [VIDEO]