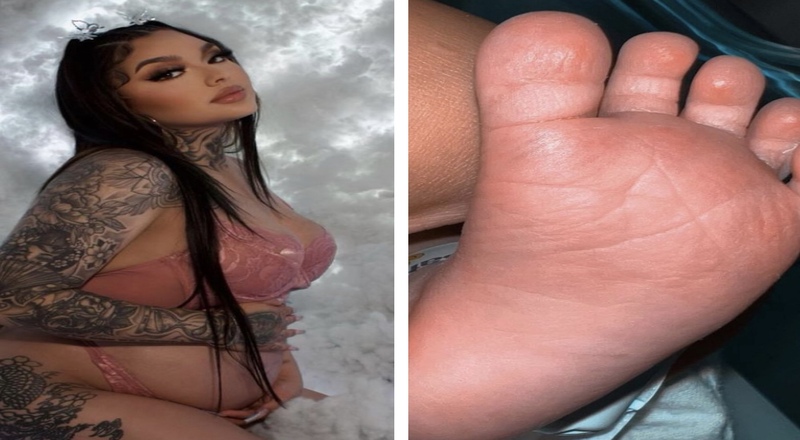 Over the past few months, Blueface has continued to trend for reasons outside of music. He’s been dating Chrisean Rock, who’s gotten tattoos of him, as well as getting his face on one of her teeth. There has even been some pregnancy rumors, surrounding Blueface and Chrisean.

Blueface and Chrisean also recently got into a fight, as this was captured on Hollywood Blvd, in Los Angeles. Blueface initially accused Chrisean of cheating on him, after going through her phone.

Now, Blueface’s baby mama and ex-girlfriend, Jaidyn Alexis, has revealed that she’s given birth to their second child. She posted a photo of the child’s foot to Instagram, as she revealed that this is a girl, and named Journey Alexis Porter.

Alexis initially made the pregnancy announcement, last December. Recently though, she took to social media to shut down rumors that the baby arrived earlier than expected. Blueface has yet to publicly comment on Alexis’ birth, as he may still be trying to deal with his chaotic relationship with Chrisean. He is also dealing with a lawsuit, after attacking a bouncer with his crew, last fall, after being asked for an ID.

Check out Jaidyn Alexis announcing the birth of her and Blueface’s second child, below.

More in Hip Hop News
LeBron James shares video of his wife asking him to do a vow renewal [VIDEO]
NBA Youngboy joins Drake, as the only artists in 2022, to reach 4 billion streams