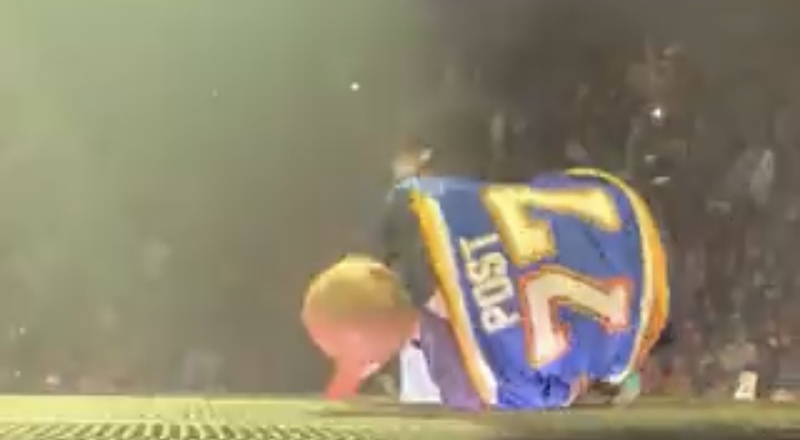 Post Malone dealt with a scary situation, during his Saturday night performance, in St. Louis, at the Enterprise Center. He suddenly fell, on stage, while he was in the middle of his concert, when he was performing “Circles.” Footage went viral, of Post falling onto his ribs. Medical staff soon approached him on stage, to check out his condition. The fall supposedly happened due to some sort of hole, in the stage.

Post was in obvious pain, but he reportedly decided to keep his performance going. According to TMZ, he resumed the concert, 15 minutes later. This included Post performing even more of his hit singles, such as “Rockstar” and “Cooped Up.” Post’s injury was visible though, as he constantly had his hand on his ribs.

After Post’s performance, he graciously decided to take photos with fans, and sign autographs. He also put out a video on social media, where he explained how the fall happened. Post says he feels okay, and that there was an area on stage that was supposed to open up instruments, but he forgot about that side of the stage.

Post is currently on his “Twelve Carat” Tour. He is being joined by Roddy Ricch as a guest performer, as the next concert will take place tonight, in Columbus, OH. That came after Post release his “Twelve Carat Toothache” album, in June, which debuted at number two in the US.

Post Malone made a few more die hard fans when he fell through a hole in the stage cracking 3 ribs. Fans said he came back out on stage after 10 minutes saying he was sorry & hurting so bad he was crying, then someone gave him a beer and he finished the concert.#PostMalone pic.twitter.com/eFZBn8TffU

we love you @PostMalone ❤️ hope you’re okay and thank you for an amazing show! st. louis loves you 🥹 pic.twitter.com/4zItpv0NUd

love you guys so much 💕 pic.twitter.com/eneJWf30fM

More in Hip Hop News
August Alsina claims that Tory Lanez did assault him, after refusing to shake his hand; August confirmed that he didn’t like Tory speaking on Jada Pinkett entanglement, as Tory denies that any assault happened
Nav’s “Demons Protected By Angels” debuts at number two in the US