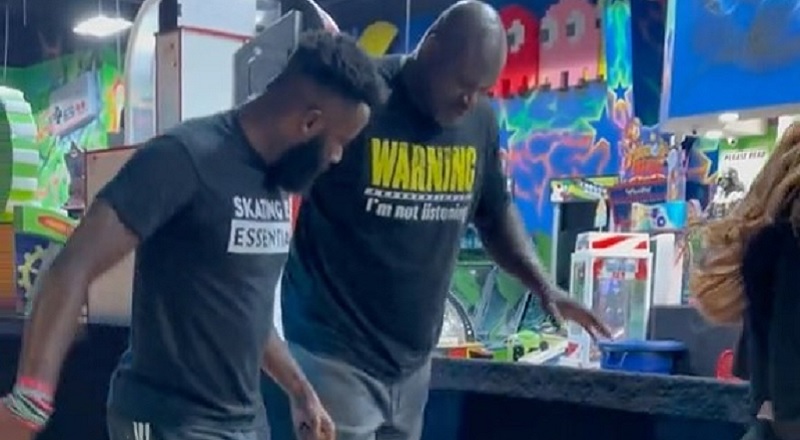 Shaq tries to learn how to moonwalk in skates

Shaq made history as one of the most dominant players in the NBA. Much of this was discussed in his documentary, which aired on HBO last year. Not only was Shaq entertaining on the court, he was entertaining off the court. There were very few moments when he was not laughing and making others laugh. This is the same energy that Shaq brought to the NBA on TNT. Now, Shaq has people watching, as he tries moonwalking while wearing roller skates.

Shaq let it be known that his father taught him how to take on challenges. When Shaq said he wanted to be a basketball player, his father said he would make him the greatest ever. As a result, his father came with the heavy handed guidance to make him be himself. This led to Shaq leading two different franchises to their first ever NBA Finals appearance. In addition, he had his own style in leading the Lakers to three consecutive championships for the only time in their franchise’s history.

Shaq brought something different to “Inside The NBA” on NBA on TNT. During his playing career, Shaq made powerful duos with the likes of Penny Hardaway, Kobe Bryant, and Dwyane Wade. In his broadcasting career, Shaq has formed another strong duo with Charles Barkley. Together, they bring the entertainment value. Even alone, Shaq brings the entertainment. He was at the skating rink and he was out there moonwalking with some people, who filmed him doing it.

Shaq tries to learn how to moonwalk in skates

More in Hip Hop News
Tupac and Afeni Shakur “Dear Mama” series, on FX, will air on April 21 [VIDEO]
White man gets aggressive with Black women in Walmart, after being caught stealing, telling them “your people steal too” [VIDEO]