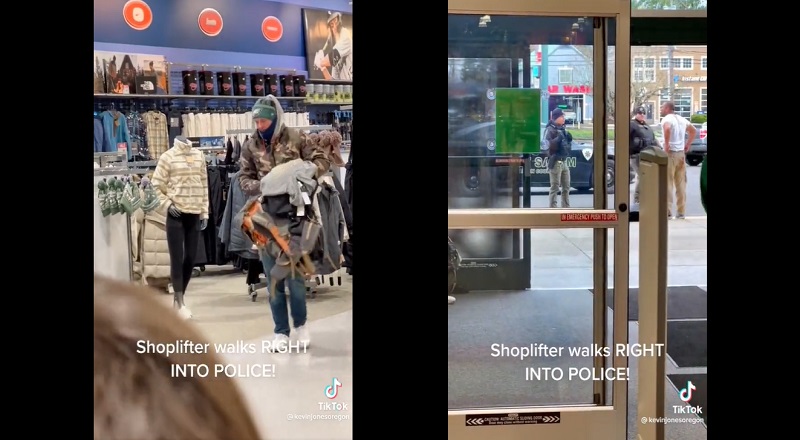 Shoplifter walks right into police after stealing clothes from store

Breaking the law is never smart, but some people really live down to expectations. When it boils down to it, people cannot be thinking things through. For reasons that seem very simple, people end up throwing their lives away. In this current situation, here is a man who decided he would steal an entire rack of clothes from a store. Not only is he carrying the clothes in his arms, but he boldly walks right out of the store. Thankfully, the cops were there to stop him, with the evidence in his hands.

Shoplifting has seen a steady increase, over the past three years. In fact, it has gotten so bad that retailers are speaking out. Over the course of thirty years, Walmart has established themselves as the biggest brick and mortar retailer in America. However, the CEO of the company spoke out, saying Walmart may close some of their locations, due to shoplifting. Fortunately, this latest video was not a seemingly never-ending Walmart fiasco.

In this video, it looks like the man was in some kind of sporting goods store. Initially, it seems as if the man is shopping, like all of the customers. When he gets a rack full of clothes, most would assume the man would head to the register. Instead, the man begins to move swiftly towards the front exit to leave the store. Apparently, law enforcement was alerted about this situation, because the cops were waiting to arrest the man, as soon as he stepped outside.

Shoplifter walks right into police after stealing clothes from store