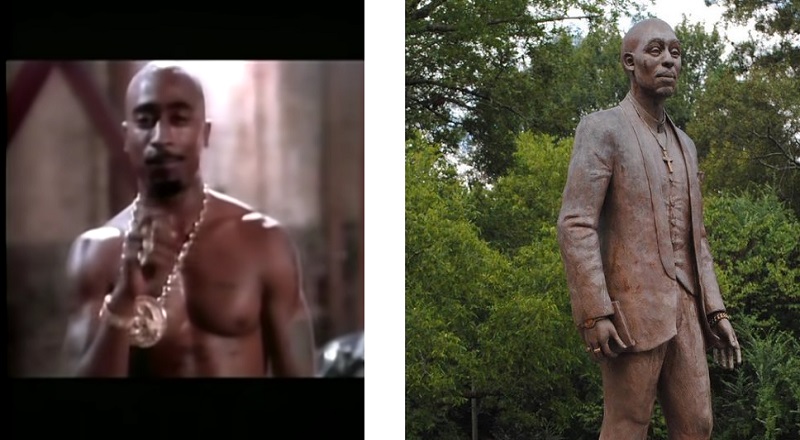 Tupac statue in Georgia criticized for looking nothing like him

Tupac Shakur was the most prolific rapper in the history of hip hop. For years, when people asked who the greatest rapper of all time was, Tupac often topped the list. During his time, he was indeed the highest selling rapper in the game. Twenty six years ago, Tupac was fatally shot, which only further propelled him into iconic status.

Tupac Shakur actually was much more than a rapper. In addition, he also had a budding acting career, along with being a social activist. As a result, Tupac received major props for his social consciousness. However, his turn to gangsta rap was also noted. During his final years, Tupac was signed to Death Row Records. Actually, Tupac passed away after fighting someone who had issues with members of Death Row.

Tupac Shakur was recently honored, in Stone Mountain, Georgia. The iconic rapper had a statue made in his honor. However, those who have seen the statue believe it is more of an insult than an honor. As a result, people have taken to Twitter to blast the statue. Already, Stone Mountain is known for their statues of controversial leaders. Doing the Tupac statue was intended to counter this. However, the fans of Tupac are highly upset with how his statue has turned out.

Tupac statue in Georgia criticized for looking nothing like him

More in Hip Hop News
Erica Banks gets criticized on Twitter, after saying what type of looks that female associates have to have around her, when at clubs [VIDEO]
Chicago Bears fan cries after loss to Packers and kicks his girlfriend out for laughing at him [VIDEO]