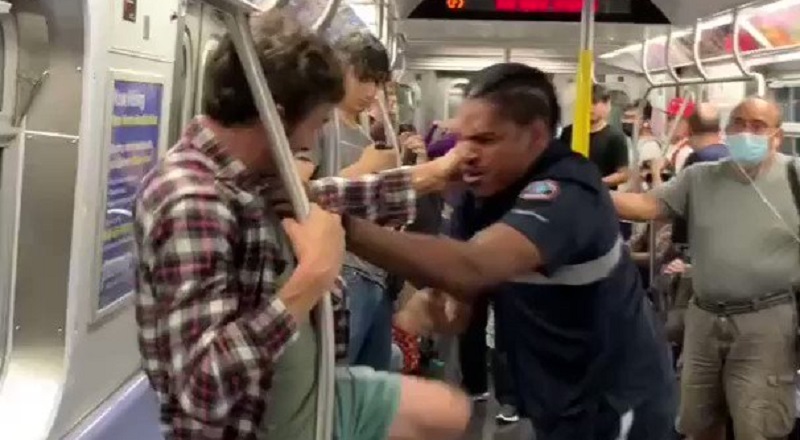 Imagine getting off work and riding the train back home, only to get attacked. Even worse, imagine the attack coming from a random man riding a bike. Whatever led up to this altercation is unknown. Clearly, there were tons of emotions riding high. These days, the most random acts of cruelty are taking place.

Increasingly, there are a disturbing number of people who feel it is fine to dehumanize other human beings. As a result, there are a lot of otherwise innocent people being the first ones to take physical action. In addition, the number of bystanders who do and say nothing are decreasing. So, this is leading to more footage of situations like these being captured.

Recently, a video took over Twitter, of two men getting into a fight on the train, while it was moving. While the city is not specified, it looks like a New York City subway. There was a Black man who was still wearing his FedEx uniform, as he presumably just got off work. Then, there was a White man who was barefoot, who had his bike on the train with him. Exactly how these two wound up in an altercation is unclear. However, throughout the first half of the fight, the White man had the upper hand. Once the Black man was successfully able to defend himself, the crowd broke the entire situation up.