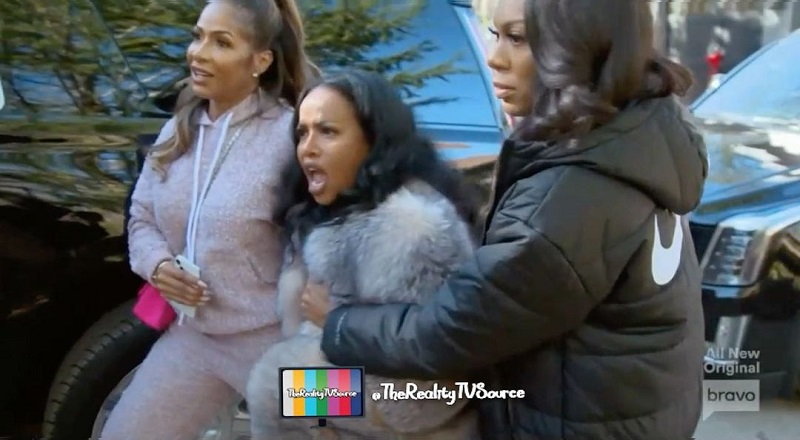 Drew Sidora and Fatum Alford get into huge argument on RHOA

Drew Sidora does not like Fatum Alford and for good reason. During her first season on “The Real Housewives of Atlanta,” Drew was open about her marital issues with her husband, Ralph Pittman. This season, Ralph has been the source of rumors. There are rumblings that Drew’s husband might be gay. Sheree Whitfield’s friend, Fatum Alford, joined the show, and immediately took on those rumors. In Fatum’s first conversation with Drew, she accused Ralph of being gay. Fatum went as far as to say she had evidence that she had someone look into.

Drew Sidora was angered and confused, which is understandable. After all, Drew is dealing with a woman she does not know basically saying she investigated her husband. As a result, Drew decided she does not want to be around Fatum. This season, Drew has gone through a lot of changes. After the terrible start, Drew and Kenya Moore have become friends. Like the rest of the ladies, Drew has been watching Kenya fight Marlo Hampton repeatedly. Meanwhile, Drew has had her own feud with her friend, Sanya Richards-Ross, of all people.

Drew Sidora, along with the rest of the ladies, stood by while Marlo Hampton and Kenya Moore argued. Because Kenya refused to talk to her, Marlo kicked her off the trip. Despite this, Kenya decided to join the ladies for an activity. Marlo tried to kick Kenya off, which made the ladies stand around for an hour. During this hour, Drew and Fatum began arguing, and it almost came to blows. The argument saw Drew barking at Fatum, which left Kandi Burruss confused.

Drew Sidora and Fatum Alford get into huge argument on RHOA