Home » Video » Nia and Noria get into a fight with Duffey and Brooke! (FULL VIDEO) #BasketballWives #BBWLA [VIDEO] 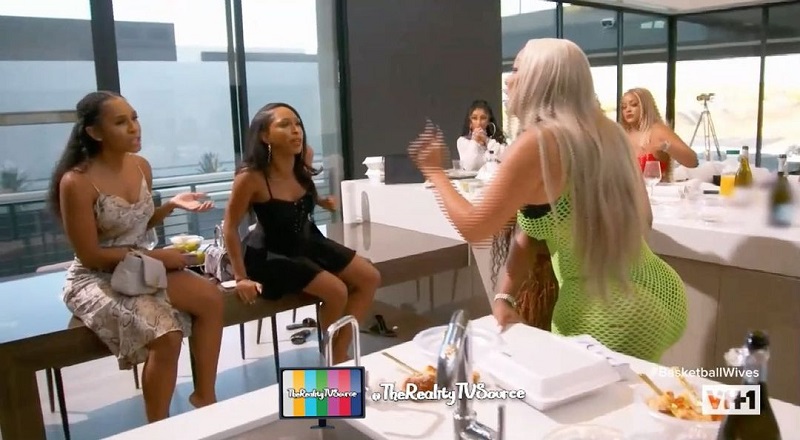 Nia and Noria get into a fight with Duffey and Brooke

Nia Dorsey has been a source of controversy, on “Basketball Wives,” this season. Because Noria Dorsey, Nia’s twin, has been with her, she has the “guilt by association” going on. As a result, Nia and Noria have been outsiders this season. Originally, Duffey invited Nia and Noria along on her Las Vegas birthday trip. The trip was highlighted by Duffey DJ-ing French Montana’s event. It turns out, Duffey is doing her last event for French Montana.

Nia Dorsey made a post mocking Angel Brinks’ baby shower, before the trip. This led to Angel Brinks being upset with Nia Dorsey, as a result. While Nia Dorsey tried to apologize to Angel, Duffey interjected, saying Angel should not accept the apology. For this reason, Nia and Noria have both felt a way about Duffey. In turn, Duffey ended up taking back her invite to Nia and Noria to her celebration, leaving the twins upset.

Nia Dorsey and her twin, Noria, got into an argument with Duffey. It started when Duffey began to explain the situation. Initially, Duffey sounded a little apologetic. Not only did Duffey admit she was being mean, she said she allowed the girls to come. However, when Nia and Noria confronted Duffey, she said they never showed up. As a result, Nia and Noria got into an argument with Duffey, and items were thrown. Suddenly, Brooke Bailey jumped into the fight.

Nia and Noria get into a fight with Duffey and Brooke

More in Video
Malaysia Pargo apologizes to Brandi Maxiell for being a bad friend (FULL VIDEO) #BasketballWives #BBWLA [VIDEO]
Travis Scott paused his concert at Coney Island, to order fans to get off of a truss; One wore Spider-Man costume [VIDEO]