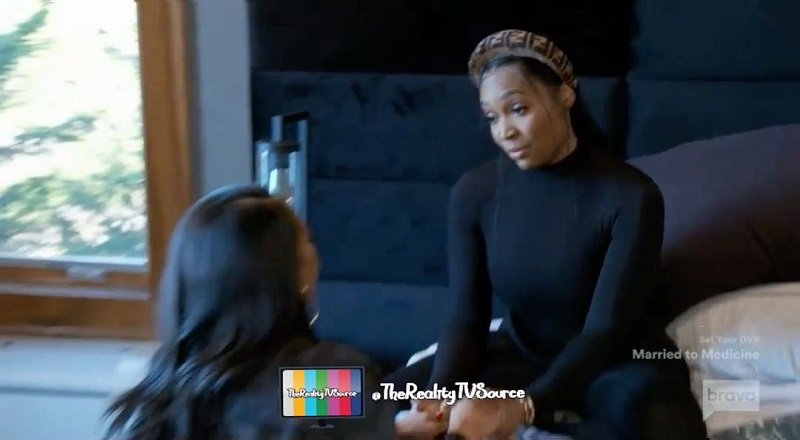 Sanya tells Marlo what Kenya said about her nephews on RHOA

Sanya Richards-Ross just sat down with Kenya Moore to talk about Marlo. Marlo Hampton has extended an olive branch to Kenya Moore. First, Marlo reached out to Kenya to make amends, in hopes of restoring their friendship. Second, Marlo has made a point of inviting Kenya to her events. Third, Marlo invited Kenya on her girls’ trip. After that, Marlo went as far as telling Kenya that she admires her. On the flipside, Kenya says she does not trust any of this.

Sanya Richards-Ross has bonded with Marlo Hampton and Kenya Moore. Introduced as Drew Sidora’s friend, Sanya has had a falling out with Drew. As a result, Sanya is making friends with the other ladies, primarily Marlo and Kenya. Despite the tension, Sanya is confronting it, head first. With that being said, Sanya has been trying to get Kenya to accept Marlo’s olive branch. When Kenya arrived, Sanya tried to talk to her about Kenya. After that, Kenya vented about Marlo’s friendship, and how she left her nephews.

Sanya Richards-Ross, in the very next scene, went to Marlo Hampton. After that, Sanya sat down with Marlo, and told her everything that Kenya shared with her, regarding her opinion on Marlo. In the confessional, Sheree Whitfield called Sanya a “mini bone collector.” However, Sanya insists she is no bone collector, because she is reporting back in hopes of restoring friendships. When Sanya mentioned that Kenya was talking about Marlo’s nephews, Marlo did get upset.

Sanya tells Marlo what Kenya said about her nephews on RHOA