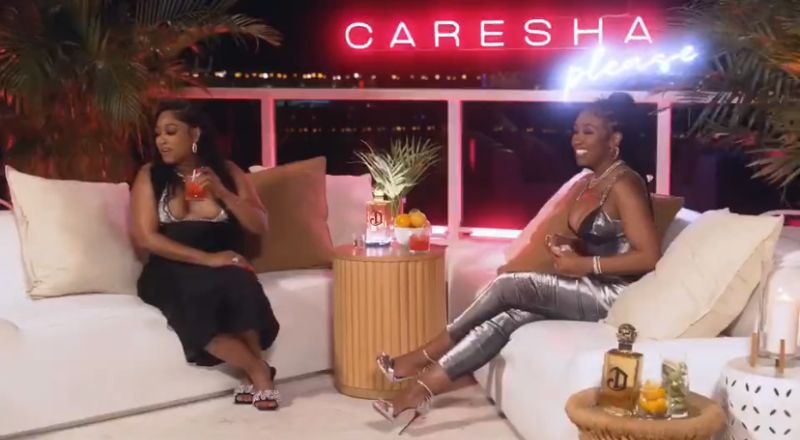 Amazing and unpredictable things can happen when two dominant women are in the same room. Yung Miami’s talk show “Caresha Please,” continues to take the internet by storm with every episode. In a new trailer teasing her next episode, Trina is the latest celebrity to be a guest on the show. In the clip, she asks Trina if she’s ever dated Missy Elliott, not holding anything back from the interview. The shocking question was not answered in the clip, leaving fans anxious to see the full interview.

Yung Miami is taking the talk show dynamic to amazing heights. Her show “Caresha Please” aired on the REVOLT network last June, going viral with over 1 billion online impressions. Continuing to break records, her show won the category for Best Hip-Hop Platform at the 2022 BET Hip-Hop Awards. Although a surprising win, some fans and critics felt she shouldn’t have won the category, as other nominees included The Breakfast Club, Complex and Drink Champs. Outside of her hosting abilities she had an amazing 2022 with JT as the “City Girls,” releasing singles with Usher and Fivio Foreign.

Coupled with a larger than life personality, Yung Miami’s show is uncensored and unlike any other podcast out. In addition to asking about Missy Elliott, she spoke with Trina about Trick Daddy, her love life and potential new music. “Caresha Please” featuring Trina airs on the REVOLT Youtube channel tonight.

What happens when Miami girls link up? 👀🤣⁰⁰You’ll have to watch the new episode of #CareshaPlease to find out!⁰⁰Watch me chop it up with @YungMiami305 TOMORROW at 8 PM ET on @revolttv YouTube channel! #Trinarockstarr pic.twitter.com/eK5M83MuRp