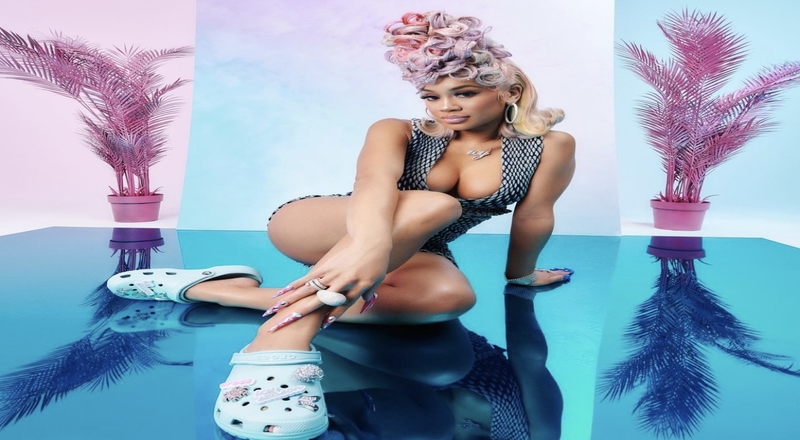 Last year, Saweetie really started to rack in the endorsement deals. Among them were McDonald’s, as the Saweetie meal was released. Saweetie also linked up with Crocs, to have her own pair of the popular footwear.

Now, Saweetie has a new pair of Crocs, that will be available on June 21. On Monday evening, Saweetie revealed that these are the Icy Jibbitz. These Crocs come in a light blue design, as snowflakes and “Icy Season” wording are attached.

“So excited to announce my custom Icy Jibbitz™ with @crocs!! Tap in tomorrow for the drop! #SaweetieXCrocs”

Crocs’ popular really started to soar in early 2021, after Nicki Minaj was seen sported a pair of pink ones. Sales for Crocs soon started to do numbers. At the same time though, Crocs has been working with Post Malone on Crocs collabs, for the past few years, as well.
Saweetie has been releasing more hot singles in 2022, as well. These include “Closer” featuring H.E.R. and “Baby Boo” with Muni Long, this month. Fans are also hoping that her debut studio album finally arrives this year, as well.
Check out a closer look at Saweetie’s new Crocs collaboration, below.

Continue Reading
You may also like...
Related Topics:Crocs, featured, saweetie

More in Hip Hop News
Beyonce’s new single, “Break My Soul,” has leaked, according to Twitter
Kyrie to the Lakers? Fans on Twitter speculate whether Kyrie Irving will sign with the Los Angeles Lakers