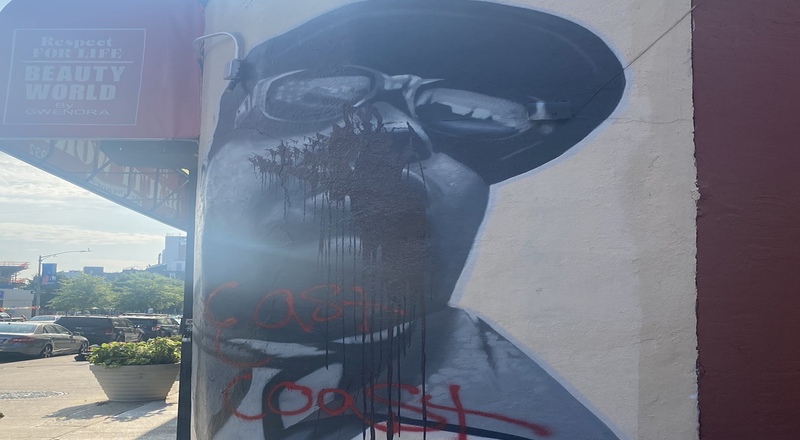 Last week, The Notorious B.I.G.’s daughter, T’yanna Wallace, trended heavily on social media. This was due to her paying her boyfriend’s $1 million bond, after he hit three people, in a hit-and-run incident, in Queens, NY. That came after attempting to flee police. Two people were injured, including a mother and her son. Wallace put up her $1.5 million Brooklyn home, to secure his bond. That resulted in plenty of criticism against Wallace, on social media.

Now, more Notorious B.I.G. news is trending. This time, in his hometown of Brooklyn, in B.I.G.’s former neighborhood of Clinton Hill. On Friday, fans noticed that one of the notable murals in Brooklyn ended up being vandalized, according to CBS News. The area of his nose was spray painted over, as “east coast” was also displayed, above the image of him.

As of now, no suspects have been caught. Surveillance footage reportedly did catch one person, who was taking a selfie while being with their dog, though. Vincent Ballentine is the artist of the mural, as he said he woke up to his work being vandalized. He initially created it, back in 2019. Thankfully, Ballentine still plans to fix the damage done to the mural.

Continue Reading
You may also like...
Related Topics:featured, the notorious b.i.g.

More in Hip Hop News
Brittany Renner says that PJ Washington pays her $2,500 per month, in child support, and not the rumored $200,000 [VIDEO]
Freddie Gibbs shares pic of Benny The Butcher showing his receding hairline in an attempt to humiliate him [PHOTO]